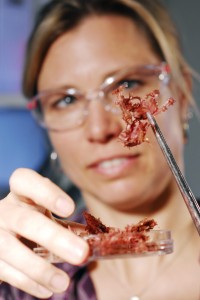 Julia Kubanek, an associate professor at the Georgia Institute of Technology, holds samples of a tropical seaweed whose surface chemicals are being studied for their potential antimalarial properties. Photo by Gary Meek, Courtesy Georgia Tech.

A group of chemical compounds used by a species of tropical seaweed to ward off fungus attacks may have promising antimalarial properties for humans. The compounds are part of a unique chemical signaling system that seaweeds use to battle enemies – and that may provide a wealth of potential new pharmaceutical compounds.

Using a novel analytical process, researchers at the Georgia Institute of Technology found that the complex antifungal molecules are not distributed evenly across the seaweed surfaces, but instead appear to be concentrated at specific locations – possibly where an injury increases the risk of fungal infection.

A Georgia Tech scientist will report on the class of compounds, known as bromophycolides, at the annual meeting of the American Association for the Advancement of Science (AAAS) Feb. 21, 2011 in Washington, D.C. The research, supported by the National Institutes of Health, is part of a long-term study of chemical signaling among organisms that are part of coral reef communities.

“The language of chemistry in the natural world has been around for billions of years, and it is crucial for the survival of these species,” said Julia Kubanek, an associate professor in Georgia Tech’s School of Biology and School of Chemistry and Biochemistry. “We can co-opt these chemical processes for human benefit in the form of new treatments for diseases that affect us.”

“These molecules are promising leads for the treatment of malaria, and they operate through an interesting mechanism that we are studying,” Kubanek explained. “There are only a couple of drugs left that are effective against malaria in all areas of the world, so we are hopeful that these molecules will continue to show promise as we develop them further as pharmaceutical leads.”

In laboratory studies led by Georgia Tech student Paige Stout from Kubanek’s lab – and in collaboration with California scientists – the lead molecule has shown promising activity against malaria, and the next step will be to test it in a mouse model of the disease. As with other potential drug compounds, however, the likelihood that this molecule will have just the right chemistry to be useful in humans is relatively small.

Other Georgia Tech researchers have begun research on synthesizing the compound in the laboratory. Beyond producing quantities sufficient for testing, laboratory synthesis may be able to modify the compound to improve its activity – or to lessen any side effects. Ultimately, yeast or another microorganism may be able to be modified genetically to grow large amounts of bromophycolide.

The researchers found the antifungal compounds associated with light-colored patches on the surface of the Callophycus serratus seaweed using a new analytical technique known as desorption electrospray ionization mass spectrometry (DESI-MS). The technique was developed in the laboratory of Facundo Fernandez, an associate professor in Georgia Tech’s School of Chemistry and Biochemistry. DESI-MS allowed researchers for the first time to study the unique chemical activity taking place on the surfaces of the seaweeds.

As part of the project, Georgia Tech scientists have been cataloging and analyzing natural compounds from more than 800 species found in the waters surrounding the Fiji Islands. They were interested in Callophycus serratus because it seemed particularly adept at fighting off microbial infections.

“The alga is marshalling its defenses and displaying them in a way that blocks the entry points for microbes that might invade and cause disease,” Kubanek said. “Seaweeds don’t have immune responses like humans do. But instead, they have some chemical compounds in their tissues to protect them.”

In the DESI-MS technique, a charged stream of polar solvent is directed at the surface of a sample under study at ambient pressure and temperature. The spray desorbs molecules, which are then ionized and delivered to the mass spectrometer for analysis.

“Our collaborative team of researchers from the Department of Biomedical Engineering and the College of Sciences has worked within the Bioimaging Mass Spectrometry Center at Georgia Tech to better understand the mechanisms of chemical defenses in marine organisms,” said Fernandez. “This is an example of cross-cutting interdisciplinary research that characterizes our institute.”

Kubanek is hopeful that other useful compounds will emerge from the study of signaling compounds in the coral reef community.