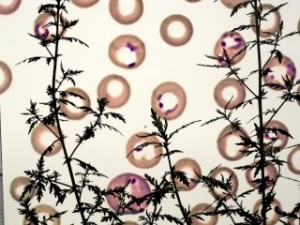 Malaria affects millions of people in the developing world each year, and fighting the disease can be difficult, because the  mosquito-borne parasite Plasmodium falciparum, which causes the deadliest form of malaria, has developed resistance to every anti-malaria drug.

Molecular parasitologist Stephen Rich at the University of Massachusetts Amherst is leading a research team that has found a promising new low-cost combined therapy with a much higher chance of outwitting P. falciparum than current modes. He and plant biochemist Pamela Weathers at the Worcester Polytechnic Institute (WPI), with research physician Doug Golenbock at the UMass Medical School, also in Worcester, have designed an approach for treating malaria based on a new use of Artemisia annua, a plant employed for thousands of years in Asia to treat fever.

“The emergence of resistant parasites has repeatedly curtailed the lifespan of each drug that is developed and deployed,” says UMass Amherst graduate student and lead author Mostafa Elfawal. Rich, an expert in the malaria parasite and how it evolves, adds, “We no sooner get the upper hand than the parasite mutates to become drug resistant again. This cycle of resistance to anti-malarial drugs is one of the great health problems facing the world today. We’re hoping that our approach may provide an inexpensive, locally grown and processed option for fighting malaria in the developing world.”

Currently the most effective malaria treatment uses purified extracts from the Artemisia plant as part of an Artemisinin Combined Therapy (ACT) regime with other drugs such as doxycycline and/or chloroquine, a prescription far too costly for wide use in the developing world. Also, because Artemisia yields low levels of pure artemisinin, there is a persistent worldwide shortage, they add.

The teams’s thesis, first proposed by Weathers of WPI, is that locally grown and dried leaves of the whole plant, rich in hundreds of phytochemicals not contained in the purified drug, might be effective against disease at the same time limiting post-production steps, perhaps substantially reducing treatment cost. She says, “Whole-plant Artemisia has hundreds of compounds, some of them not even known yet. These may outsmart the parasites by delivering a more complex drug than the purified form.”

Rich adds, “The plant may be its own complex combination therapy. Because of the combination of parasite-killing substances normally present in the plant (artemisinin and flavonoids), a synergism among these constituent compounds might render whole plant consumption as a form of artemisinin-based combination therapy, or what we’re calling a ‘pACT,’ for plant Artemisinin Combination Therapy.”

Rich’s group conducted experiments in rodents to explore whether feeding them the whole plant was effective. They found that animals treated with low-dose whole-plant Artemisia showed significantly lower parasite loads than those treated with much higher doses of the purified artemisinin drug or placebo.

Further, in their most recent experiments in a rodent malaria model, Elfawal and colleagues confirmed Weathers’ earlier results showing that animals fed dry, whole-plant Artemisia had about 40 times more of the effective compound in their bloodstream than mice fed a corresponding amount of the purified drug. This is eight times the minimum concentration required to kill P. falciparum. In dose-response experiments, treatment with whole-plant Artemisia was just as effective at reducing parasitemia as the purified form for the first 72 hours, and faster reduction of symptoms thereafter compared to other groups.

These results, if they translate to humans with further research, could solve two problems with the current drug strategy, Rich says. First, parasites may be less able to evolve resistance to the whole plant because the makeup is far more complex. Second, it could drastically reduce the high cost associated with malaria treatment by allowing for low cost, locally sustainable production of whole plant therapy.

“It’s a local agriculture solution to a global health problem,” says Rich. Preliminary findings from dose-response experiments suggest that whole plant therapy would require a far smaller dose of dried plant than the corresponding amount of purified artemisinin, perhaps as much as a five-fold increased potency for the whole plant.

This work was funded by UMass Medical School’s Center for Clinical and Translational Science. Findings appear in the current issue of the journal PLOS ONE.