While its evolutionary history is disputed, there’s no doubt malaria was a key factor in the history of the Americas

I am in the midst of a fascinating book about the way the world changed after Columbus “discovered” America in 14921. Called, appropriately, 1493: Uncovering the World Columbus Created, it is author Charles C. Mann’s follow-up to an earlier, equally engaging book on pre-Colombian America (no prizes for guessing the title, which is 1491: New Revelations of the Americas Before Columbus2).

In both works, Mann devotes significant attention to the role that disease played in re-shaping the Americas in the immediate aftermath of European arrival. However, it is only in 1493 that he turns to malaria, and here he presents several startling examples of how malaria may have influenced key events in the history of the Americas, with subsequent knock-on effects on Europe as well. It is worth noting early on that Mann is very open about the uncertainty in his theories – not only were many other factors clearly involved, but malaria never acted alone, and was commonly accompanied by other introduced diseases, such as yellow fever. Yet even with these disclaimers, Mann’s stories are thought-provoking and illuminating.

For example, he describes how malaria contributed to the establishment of the enormously successful and unarguably brutal slave plantations of the American South. In its early years, the colony of Carolina was a net exporter of slaves, as captured Indians (Mann’s terminology) were sent elsewhere in colonies as forced labour. Additional work in the fields was provided by indentured servants, who were contracted for set periods of time; at first, slaves from Africa were relatively rare. 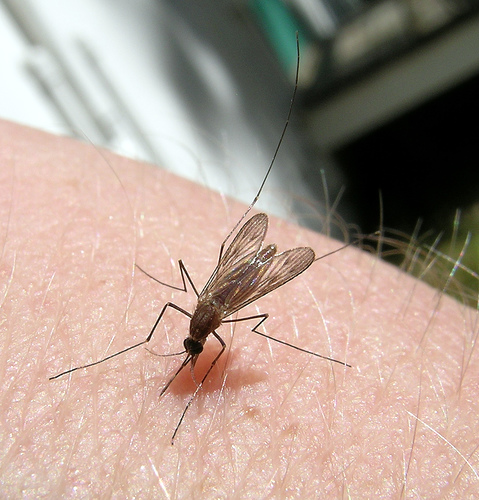 Mosquitoes which were capable of transmitting malaria, such as this Anopheles quadrimaculatus, were already present in the Americas when Europeans and Africans arrived, carrying different forms of malaria. Photo courtesy of smccann on Flickr (http://www.flickr.com/photos/deadmike/)

This all changed as European and African diseases intermingled and became established in the New World; new agricultural practices, also imported by the Europeans, created habitats favourable for a native mosquito species which was able to transmit both Plasmodium vivax and Plasmodium falciparum malaria. Mann attributes the introduction of the former to Europeans, as P. vivax tolerates relatively low temperatures and was rife throughout southern England during the 1600s; P. falciparum was likely brought by African slaves.

Since, according to Mann, no human malaria had been present in the Americas prior to Columbus’ arrival, native Indian people were highly susceptible to these diseases, and either died or were incapacitated and unable to work while infected. Similarly, while some of the contracted servants brought from Europe may have been exposed to P. vivax in their home regions, and thus had some measure of acquired immunity, they fell like flies before the highly pathogenic P. falciparum species.

Africans, conversely, were exposed to P. falciparum as children in Africa and if they survived, were awarded a level of protection. Moreover, a high proportion of people from West and Central Africa possess one or more of a group of genetic mutations, the best-known of which is the Duffy negative phenotype, which makes the carrier almost completely resistant to P. vivax malaria.

As a result, in the newly-malarial fields and marshlands of what is now the American south, plantation owners rapidly ran out of native Indian slaves and indentured European labourers became financially unviable. The solution? Bring in a group of people resistant to the diseases decimating your other workers. And thus, in part, was borne the horrifying trans-Atlantic slave trade, bringing malaria-resistant West and Central Africans to live and die on the plantations in the American South, in a divided society that would persist for over three centuries.

Another quick example: Mann describes how malaria, in part, was responsible for the formation of Great Britain as a nation in the early 18th century. It turns out that in the late 1600s, Scotland, not wanting to miss out on the spoils of colonization, decided to establish a trading post in Panama. As with the plantations of the north, Mann explains that malaria (along with yellow fever) was brought to the isthmus of Central America by Europeans and Africans post-Colombus. Ravaged by disease, and unable to trade with any local tribes (presumably they too had been decimated by imported infections), the first Scottish colony was an abject failure. So, too, was a relief expedition a few years later. Both had been “joint-stakes” ventures, whereby thousands of merchants had contributed a small investment, with a hope of rich returns. Unfortunately, all of these investors lost everything. England had for a century shared a monarch with her neighbour to the north but was consistently denied full union by Scots understandably wary of domination by the larger country. Now, her leaders saw an opening. The English offered to repay the lost funds of all those who had invested in the ill-fated Panama scheme; in return, all they asked for was unification. In the end, England got her wish, and the Union Act of 1707 combined the two countries into the modern nation of Great Britain, a move, perhaps, that was partially defined by malaria.

While these are without doubt beautifully written and captivating tales of dramatic changes occurring throughout the first few centuries post-Columbus, particularly the idea of African slaves being brought in to replace Indian workers relies heavily on the supposition that Plasmodium vivax was introduced to the Americas by Europeans in the late 16th and early 17th centuries. Unfortunately, this is not strictly true.

Modern analysis of the origins of malaria usually relies on genetic evidence – that is, comparison between sequences of DNA between malaria from different regions and even different species, which can give clues as to how the parasite has changed and evolved over time. However, genetic traces of the path of malaria can also be uncovered from looking at malaria’s hosts, including human populations. For example, the Duffy negative group of mutations, mentioned earlier, provides almost or even complete protection against P. vivax. Given the high prevalence of these mutations in West and Central African populations (95-99% in some places!), some scientists have considered this evidence that P. vivax has co-evolved with humans in these regions for thousands of years, and that therefore the parasite might have evolved here3.

However, more recently, this suggestion has been refuted by looking at genetic patterns present within different strains of the Plasmodium vivax parasite itself, and comparing it to other species of malaria throughout the world. It turns out that genetically, P. vivax is actually very closely related to a group of malaria species that infect macaque monkeys in south-east Asia4,5. Estimates of the age of different strains of P. vivax also places the most ancient lineages in Asia, consistent with an “out of Asia” hypothesis. While this view has now approached consensus in the literature, the scientific jury is still out to explain the high occurrence of Duffy negative populations in Africa.

South American monkeys, such as this howler, are infected with forms of malaria which are closely related to that which infects humans. This has been used as evidence to show that Plasmodium vivax arrived in the Americas prior to Europeans in the 15th century. Photo courtesy of Rainbirder on Flickr (http://www.flickr.com/photos/rainbirder/)

Similar molecular tools have also been used to try to figure out when Plasmodium vivax first reached the Americas. In this, scientists have been assisted by the discovery of a species of malaria that infects monkeys, called P. simium. Genetically very similar to P. vivax, scientists have dated its evolutionary origins to show that P. vivax probably first entered the Americas via Melanesia and the Pacific several thousand years ago5. After this time, it managed to switch hosts into monkeys, producing modern variants of P. simium over time. As such, some native Indian populations may have encountered P. vivax long before Europeans ever arrived. However, what is also clear from analysis of modern P. vivax strains that are present in the Americas is that they are largely of European origins. It may even have been that native populations of pre-Columbian America found ways to manage P. vivax, perhaps through controlling its mosquito vector, thus reducing the parasite’s impact. Once Europeans arrived, however, not only were Indians unable to continue managing the land as they had done for generations, but they were suddenly faced with a huge new influx of P. vivax, and of strains they had not yet encountered3.

As such, having thus dashed a drop of water on Charles C. Mann’s parade, I concede that Europeans probably were responsible for the bulk of P. vivax in the early years of the Columbian Exchange, and particularly in the south-eastern United States where he argues it had such a big impact on the nascent trade in African slaves. Moreover, P. falciparum, by far the more deadly of malaria species, was also clearly introduced by these forced labourers from Africa, leading to greater mortality and perhaps, ironically, an even greater dependence on more African slaves. While perhaps hardly a game-changing disease like malaria, Mann might also be interested to learn that another wide-spread parasitic disease, intestinal schistosomiasis, was also likely transported to the Americas by the slave trade, and still remains a public health threat in parts of Latin America today.

In our highly globalized world, we are well aware of the risks of transporting diseases between continents and societies. However, as the theories regarding the origin of malaria in the Americas show, humans (and other animals) have in fact been disseminating disease-causing organisms to new places since the very dawn of our evolutionary history. In fact, Mann argues, very successfully, that while we attribute globalization to 20th century, transport and communications technology, we should instead look half a millennium back, and appreciate how the conquest of the Americas created the first global trade network spanning the Pacific, Atlantic and Indian Oceans, and therefore sowed the seeds of our own modern inter-connected age. And, within those early origins of globalization, even diseases themselves, such as malaria, may have played a role in shaping history.