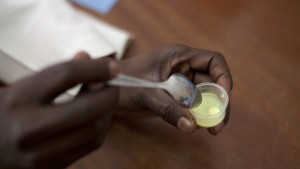 A new study from WWARN’s ACT Africa Baseline Study Group finds that current indicators of the efficacy of ACT based on persistence of parasites in the first 3 days after treatment may need some adjustment  for African populations, due to the differences in immunity between African and Asian populations.

Slow parasite clearance – the rate at which malaria parasites decline in the patient’s blood under treatment – is a key indicator of antimalarial resistance. Current guidelines recommend in-depth assessment for the presence of malaria drug resistance in a specific geographical region if malaria parasites are still present in the blood of over 10 per cent of patients three days after treatment.

The research, undertaken by a WorldWide Antimalarial Resistance Network (WWARN) study group, finds that the recommended threshold may need to be adjusted for African populations. The current threshold of 10 per cent is based on data from Asian populations, but higher levels of immunity to the malarial parasite in African populations may mean that overall these patients clear their parasites more quickly. This indicator may need to be adapted to  highlight the potential presence of resistance in this region.

The results of the study suggest that the recommended threshold could be decreased from 10 per cent to 5 per cent for African populations. Lowering the percentage could mean that monitoring mechanisms would be able to identify areas at high risk of resistance earlier on, so that appropriate intervention measures could be taken.

“Quickly identifying areas where malaria treatments are becoming less effective is critical if we are to optimally respond to the emergence of antimalarial resistance,” says Prof Umberto d’Alessandro, Disease Control and Elimination Unit Director for the MRC Gambia Unit. “We need to identify these ‘hot spots’ of antimalarial resistance to inform international malaria control and containment efforts. Reducing this benchmark figure would give us a more sensitive way of identifying the presence of malaria drug resistance in Africa at an early stage.”

Researchers pooled data from nearly 30,000 malaria patients in sub-Saharan Africa from 84 clinical trials – the largest study of its kind. The team investigated the different baseline values for parasite clearance in these patients for three leading antimalarial treatments – artemether-lumefantrine, artesunate-amodiaquine and dihydroartemisinin-piperaquine.

Previous meta-analyses of published literature found that over the same period, the number of patients with malaria parasites in their blood after day three of treatment was much lower in African populations than in Asian populations. In Asian populations approximately five to six per cent of patients still show signs of parasites in their systems after three days of treatment. In data from 30,000 patients living in sub-Saharan Africa, this same figure was less than one percent.

“There are many reasons for this result,” says Dr. Ambrose Talisuna, Head of Unit-Malaria Case Management and Drug Evaluation at the KEMRI-Wellcome Trust Research Programme. “In Asia, due to low transmission rates of malaria, children and adults are just as likely to be infected with malaria. In Africa, the rate of malaria transmission is much higher which means that even young children, the primary population affected by malaria deaths in Africa, have some acquired immunity to malaria infection. These are just some of the reasons why there is a difference in the percentage of people with parasites after treatment between the two populations.”

Artemisinin-resistant malaria parasites have already emerged across many parts of Southeast Asia, seriously threatening global malaria control and elimination programmes. If the resistance were to emerge in Africa, as we’ve seen in the past, it could place millions of lives at risk of treatment failure and threaten the monumental gains we’ve made against malaria over the past decade.

“This study found that parasite clearance after treatment with an ACT is still extremely rapid in Sub-Saharan Africa. However, it also shows that we should approach the threshold of 10 per cent with caution. A ‘one-size fits all’ approach does not take into account the differences in populations from different regions,” says Prof Grant Dorsey, Associate Professor in Residence in the Department of Infectious Diseases, University of California San Francisco.

If resistance spreads to, or emerges in Africa much of the great progress in reducing deaths from malaria will be reversed. Our ability to respond to artemisinin resistance depends on swift gathering of evidence, which can be quickly translated into public health and clinical interventions.