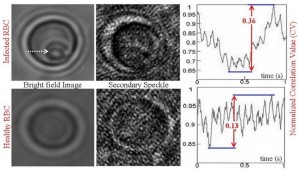 Secondary Speckle Sensing Microscopy (S3M). The difference between an infected red blood cell (top) and a healthy cell (bottom) is revealed by S3M, in part, by considering the dynamics of the correlation value (CV). CV indicates the similarity between two patterns. 1,000 CVs are calculated from pairs of consecutive speckles acquired in 1 second. As shown in the chart at right, the CV oscillation range for the infected cell (top, 0.36) is almost three times larger than that of the healthy red blood cell (bottom, 0.13). In the top left image of the infected cell a parasitic life-cycle stage of malaria, called “trophozoite,” can be seen (arrow). Credit: Dan Cojoc, Materials Technology Institute, National Research Council, Italy.

Correctly and quickly diagnosing malaria is essential for effective and life-saving treatment. But rapid detection, particularly in remote areas, is not always possible because current methods are time-consuming and require precise instrumentation and highly skilled microscopic analysis.

The new system, developed by an international team of researchers, uses “speckle imaging,” an optical sensing technique that measures the differences in how laser light bounces off the membranes of healthy and infected red blood cells. By comparing the apparently random scattering (speckling) of light as it builds up from multiple images, a clear statistical pattern emerges that identifies cells that harbor the parasite responsible for malaria. The team presents its preliminary results involving 25 cell samples (12 healthy, 13 infected) in the Biomedical Optics Express paper.

“A new diagnostic tool is urgently needed,” notes Dan Cojoc, Ph.D., lead author of the study and a researcher at the Materials Technology Institute, National Research Council in Trieste, Italy. “With a fast, portable, low-cost, and accurate diagnostic tool, physicians can confidently and quickly administer the correct therapy.”

According to the researchers, this timely diagnosis maximizes the likelihood of successful, life-saving treatment. It also minimizes the chances that inappropriate therapy will be given, which would help combat the growing problem of drug resistant malaria.

Malaria is most common in warm, wet climates where mosquitoes thrive. It claims nearly one million lives a year, mostly of African children.

A Faster Path to Diagnosis
The current diagnostic gold standard for malaria, Giemsa-stained blood smear, uses optical microscopy to identify different species of the malaria agent, Plasmodium, in blood samples. This technique requires skilled medical professionals trained to identify the telltale signs of the parasite throughout its life cycle and its population density in the bloodstream.

In an effort to find a more effective means of detection, Cojoc’s team of biophysics researchers in Italy joined forces with malaria experts from Israel and Spain. Together they turned to speckle imaging, because of its ability to construct a statistically significant picture, as a new way to improve the diagnosis of malaria. It’s called speckling because of light’s wave-like ability to brighten as waves combine and fade as they cancel. The resulting patterns have a distinctive speckled pattern.

The specific technique the researchers used is called Secondary Speckle Sensing Microscopy. By applying this imaging technique to an automated high-throughput system, the researchers were able to deliver results in as little as 30 minutes. They did so with a high rate of accuracy and without the need for highly trained technicians and a well-equipped hospital laboratory. The current time to diagnosis in most African medical centers is typically between 8-10 hours.

Speckling to Paint a Clearer Picture
Secondary Speckle Sensing Microscopy begins with illuminating red blood cells with a tilted laser beam. This produces a time-varied speckle pattern field based on the cells’ thermal vibration and the movement of their membranes — traits that differ in healthy and diseased states. The speckle patterns are inspected under the microscope and recorded on a camera at a high frame rate. Using two automated analytical methods — “fuzzy logic” and “principal component analysis” — scientists scour a set of speckle parameters to extract statistical information about changes in red blood cells’ membranes and their flickering movements. Scientists then make a diagnosis based on statistical correlations in speckle patterns between healthy and diseased cells.

While these preliminary results are encouraging, the investigators note that further study is needed to validate the results and further refine the technique. If the positive outcomes hold up, field studies or clinical trials of the new method might be deployed as early as 2013.