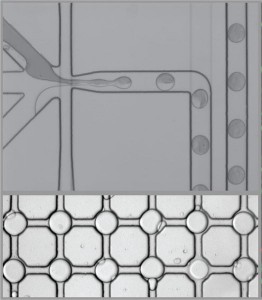 The high sensitivity is achieved by performing the REEAD technology within droplets surrounded by oil. The malaria parasites are distributed in the pico-litre droplet, where they react effectively with the other components of the REEAD technology (Source: Sissel Juul and Birgitta Knudsen).

A new diagnostic test could revolutionize the treatment of malaria, one of the world’s most persistent and deadly diseases, making it possible to diagnose the illness from a single drop of blood or saliva.

The test, developed by researchers at Aarhus University in Denmark, detects very low levels of an enzyme produced by the Plasmodium parasite, the organism that causes malaria. This could allow intervention before an outbreak develops, researchers say.

“The great advantage of our method is that we can test for malaria using saliva samples and the the detection limit is very low – less than one parasite per microliter,” said Birgitta Knudsen, an associate professor at Aarhus University’s Interdisciplinary Nanoscience Centre and the Department of Molecular Biology and Genetics. “This means that it will be possible to also screen non-symptomatic individuals and discover cases with very low parasite concentrations. Hence, it will be possible to treat even mildly infected patients and thereby prevent outbreaks before it is too late.”

The two most common forms of malaria testing both require blood samples, and there are drawbacks to each. One requires a skilled technician to test the blood, while the other cannot detect low levels of the parasite, Knudsen said.

The new method, which uses a technology called REEAD (Rolling Circle-Enhanced Enzyme Activity Detection), could prove more time- and cost-effective than current diagnostic methods, and could be performed by personnel who have no specialized training. It could also be used in developing areas, where expensive equipment, clean water and electricity might not be readily available.

The World Health Organization estimates that more than 650,000 people die from malaria each year. The vast majority are children in sub-Saharan Africa.