Home / Featured / Integrated Strategies for Vector Control: Are They Feasible?

The idea of “integration” of disease efforts is gaining ground in the public health world. But what does that mean in the case of malaria, and will it actually work?

With increasing pressure on public health spending to maximize efficiency and efficacy, from both donor agencies as well as within individual governments and Ministries of Health, there has been a push to explore options for integrating disease control systems within countries. “Integration” in this context means developing horizontal platforms for disease prevention and control, rather than vertical, separate systems which focus on one disease only, and which don’t provide an overall contribution to the health system beyond the focus on that one particular disease.

There is already some evidence that integration can lead to positive health gains in terms of treatment coverage and disease control. For example, in Uganda, the Ministry of Health recognized a need to focus more closely on lymphatic filariasis, which is endemic to Uganda but is not as prevalent as other neglected tropical diseases. Its relative scarcity and focalized distribution within the country means that a separate system exclusively for lymphatic filariasis control would be costly and potentially inefficient; as such, the Ministry of Health decided to integrate filariasis surveillance and treatment alongside existing and well-established control programmes for schistosomiasis and soil-transmitted helminths, which have coverage to wide areas of the country and can efficiently provide additional services where lymphatic filariasis is known to occur. 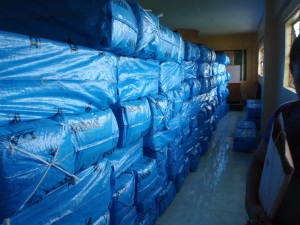 Long-lasting insecticide treated bednets stacked for distribution as part of malaria campaigns – while these nets might not be effective against all other mosquito-borne diseases, they may provide some protection, and moreover, the distribution networks used could be an effective platform for additional measures to target those disease vectors, in a more efficient manner. Photo: Rowena Harbridge, AusAID. Courtesy of Flickr.

Due to malaria’s high impact in many countries in terms of morbidity and mortality, controlling malaria often commands significant proportions of funding within Ministries of Health, and it similarly carries weight with international donors. Malaria control initiatives usually encompass a number of elements, such as improving diagnostic capacities, distribution treatments, and also integrated vector control strategies, such as distribution of long-lasting insecticide treated bednets, indoor residual spraying, and other efforts. Given that many other diseases of concern, particularly in countries with endemic malaria, are also vector-borne, perhaps there is an opportunity for utilizing existing vector control strategies employed for malaria as a framework, and integrating other threatening diseases transmitted by mosquitoes, such as dengue virus, Chikungunya virus, filariasis, encephalitis and yellow fever?

One of the potential challenges with integration across vector-borne diseases lies with the issue of the vectors themselves. Namely, while all the above-mentioned diseases are transmitted by mosquitoes, they in fact require different species and genera of mosquitoes for transmission. Most interventions against vectors are based upon behavioral traits of the target species, so when behavior differs between species, the efficacy of the intervention may be affected. 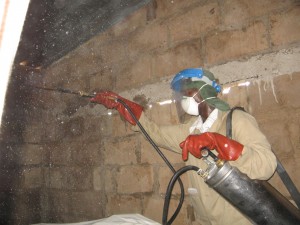 Indoor residual spraying with insecticide is a method employed to reduce the number of mosquitoes sheltering within houses between blood meals, and so won’t necessarily effectively target outdoor Aedes mosquitoes. Photo: ©Valentina Buj, licensed under Creative Commons, courtesy of Flickr.

For example, long-lasting insecticide treated bednets are especially effective against mosquito species that feed at night inside houses, such as some of the species of Anopheles that transmit malaria to humans; bednets are also thus effective against other species with similar feeding behavior, such as the Culex mosquitoes that can transmit filariasis roundworms. However, sleeping under a bednet might not be as effective a strategy against Aedes mosquitoes that bite primarily in the morning and in the evening, and which often prefer to feed outdoors rather than in houses.

Similarly, indoor residual spraying (IRS), where insecticide is used to coat the inside walls of houses to kill resting mosquitoes, is effective against mosquito species that rest indoors during the day or when not feeding at night. This again includes a number of the Anopheles species that transmit malaria, as well as some Culex species. It won’t be effective against outdoor-favoring Aedes, nor Mansonia, another genus of mosquitoes that can transmit filariasis, and that prefer resting outdoors. There are also some species of Anopheles, such as those that are implicated in the transmission of sylvan Plasmodium knowlesi in the forests of Borneo, which appear to prefer feeding outdoors; P. knowlesi is considered an emerging threat, as its prevalence seems to be increasing in parts of South-East Asia, and yet it would seem that IRS is not necessarily the most appropriate strategy for control of this type of malaria.

Overall, vector borne diseases present a promising opportunity for integration, yet there are still challenges, not least those presented by the different biological and ecological determinants of disease transmission. What will likely be needed to develop a successful integration strategy is a carefully planned approach, which quantitatively takes into account factors such as national disease priorities, the extent of geographical and epidemiological overlap between the target diseases, and information on the existing health system in the country in question. Similarly, as integration is implemented, it will be important to establish appropriate and accountable metrics to evaluate the system and ensure it is achieving gains across all target diseases, and having an overall positive impact on the health system and the health of the target population.