Home / Featured / Too Much of a Good Thing: Why Over-Diagnosis of Malaria Can Be a Big Problem

When the challenges of malaria control are discussed, most people probably think first about the difficulties of preventing mosquito bites, or perhaps how to get treatment to the millions of people that live far from hospitals and clinics. These are clearly enormous obstacles to preventing and treating malaria, but similarly important is the need for accurate diagnosis. Perhaps surprisingly, while under-diagnosis (i.e. not identifying and treating true cases of malaria) is certainly an issue, over-diagnosis (namely assuming a patient is suffering from malaria without confirmatory testing, or where testing produces false positive results) is shockingly common and may be causing knock-on challenges to health systems in many places.

A quick glance through some recent scientific literature reveals a number of examples where researchers have identified over-diagnosis in hospitals and clinics; for example, in 2014, Kilonzo and colleagues[1] observed that there was only moderate agreement between traditional forms of diagnosis of malaria, notably blood slides, and more sensitive methods such as rapid diagnostic tests or PCR (a molecular detection method). The paper also references almost a dozen other scientific articles that demonstrated either over-diagnosis, or treatment being given even when a malaria test was negative. One of these papers, by Harchut and colleagues in 2013[2] (full disclosure: I was one of Ms. Harchut’s advisors on the paper, and am a co-author), showed a large discrepancy between test results by blood slide versus rapid diagnostic tests when both tests were used side by side on the same patient; it is hypothesized that this type of over-diagnosis may be particularly prevalent in areas of low to moderate malaria prevalence, where the likelihood of true malaria cases is lower (such a relationship was demonstrated in another recent article on malaria mis- and over-diagnosis in Afghanistan: see Leslie and colleagues’ 2014 paper in the British Medical Journal[3] for more details).

But, you may ask, why is this actually a problem? Surely over-diagnosis is just a sign of being necessarily cautious, when dealing with a very dangerous disease such as malaria? Unfortunately, over-diagnosis also leads to over-treatment, which is not only expensive, and a significant burden on many resource-limited countries (in the paper by Harchut and colleagues, there is an estimate of the dollar costs associated with over-diagnosis and over-treatment in Tanzania, where artemisinin-combination therapies, or ACTs, are cost-subsidized). Providing treatment to people who are not infected with malaria, particularly if there is low compliance for taking medicine or doses are not accurately calibrated, is a sure-fire way for resistance to drugs to emerge. There are already very worrying signs of resistant to artemisinin derivatives, the main line of defense against the most dangerous type of malaria, being reported from South-East Asia (the Worldwide Antimalarial Resistance Network, WWARN, has much more information related to this topic: www.wwarn.org). Finally, if a patient is unwell, and is falsely diagnosed with and treated for malaria, then their true cause of illness will go undiagnosed and untreated, leading to persistence of other disease agents in the population, leading to continued poor health and even possibly death.

Given the downsides to over-diagnosing malaria, and the costs associated with unnecessary treatment, why does it happen? The specific reasons may vary from place to place, but one that seems common in many parts of the world is that the nurse or clinician treating the patient may perceive the cost of not giving the treatment, and then the patient dying, perhaps of malaria, as even higher. After all, the costs associated with over-diagnosis and over-treatment tend to be longer term and not obvious at the individual level, such as the emergence of antimalarial resistance. Similarly, if the patient is negative for malaria, many clinics in rural or under-resourced settings lack the health structures or diagnostic capabilities to figure out what actually is causing the illness in the patient, so treating them for malaria is seen as better than not being able to treat them at all. Malaria famously has very general, non-specific symptoms, which may cause even experienced clinicians to mistake another febrile illness for malaria, particularly in the absence of a conclusive diagnostic test. Finally, in many cases, there is pressure from the patient to be treated; anxious patients may not be willing to leave a clinic until their sick child is treated for something, even if tests demonstrate the child is not infected with malaria.

There are a number of possible solutions to the problem of over-diagnosis, and progress is being made. Access to better diagnostic tests for malaria, including better training for clinicians, doctors and nurses, as well as the provision of easy-to-use point of care diagnostics such as rapid diagnostic tests, is one part. Organizations such as WWARN are assisting in this process through providing information on diagnostic standards, to assist healthcare providers; there is also a movement to provide subsidized rapid diagnostic tests alongside malaria treatment via the Affordable Medicines Facility for Malaria initiative. Likewise, educating both healthcare providers as well as the public on the importance and meaning of diagnostic tests will be very important – if patients realize that a negative malaria test can be trusted, and is a sign they should be seeking diagnosis for another cause to their illness, they may reduce their demand for superfluous malaria medication. This of course also means that health systems must be strengthened so that other causes of diseases, particularly those with symptoms similar to malaria, can be accurately identified and appropriately treated. Of course, these are big asks! But it is going to take holistic and large-scale efforts to sustainably control, and hopefully ones day eliminate, malaria.

[2] Harchut et al. (2013), “Over-diagnosis of malaria by microscopy in the Kilombero Valley, Southern Tanzania: an evaluation of the utility and cost-effectiveness of rapid diagnostic tests”, Malaria Journal, vol 12, page 159 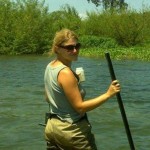