Home / Featured / Notes from the Field: The Importance of Health Extension Workers in Diagnosing and Treating Malaria in Ethiopia 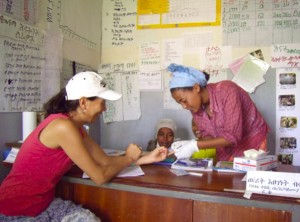 Since 2010, nearly 30,000 health extension workers (HEWs) in Ethiopia have been trained and supported to provide integrated community based case management (iCCM) of malaria, pneumonia, diarrhoea and severe malnutrition. Although HEWs started treating malaria before 2010, diagnostic based treatment of malaria using multiple species RDT was scaled up as part of the iCCM programme.

In 2011, I visited a health post in the Amhara region. The health post covers nearly 10,000 population and there are 4 health extention workers. All of them had received the iCCM training. I asked one of them to perform a RDT test on me. She put on the gloves, opened one RDT, cleaned my finger with the wipe, poked me, drew blood in the fine tube, and performed a perfect rapid diagnosis. She waited for a while, read the result, and told me that I did not have malaria.

But many children do suffer from malaria in her village. She took us to a house 30 feet away from the health post. The one year old baby had fever one night. His mother took him to the health post. The HEW checked the baby – he had malaria. The baby received ACT and recovered after a few days. “We are very happy that our children can receive treatment in the village when they are sick. Now we take our children to the health post for immunization automatically because we trust the HEWs”, said the happy mother holding a vaccination card. 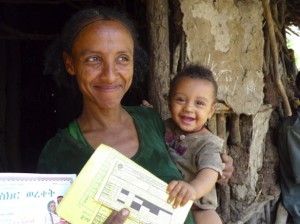 To be able to tell if a child with fever is suffering from Malaria is a big deal, for proper diagnosis and treatment. Every child with fever coming to health post seeking care receives a malaria test using RDT (unless in areas above 2,500 meters). Between 2010 and 2013, 4.6 million sick children under 5 years of age in Ethiopia received effective treatment for malaria, pneumonia, diarrhoea and severe malnutrtion. Many more children celebrate their 5th birthday.

I hope more countries affected by Malaria in Africa will introduced community based malaria treatment, integrated with iCCM, when and where appropriate.