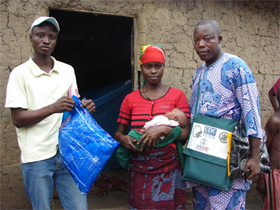 Malaria is a major health problem in Benin, where the entire population lives in areas with malaria transmission. Malaria is a leading cause of morbidity and mortality among children under five, accounting for 44 percent of outpatient visits and 40 percent of all hospitalizations.

The President’s Malaria Initiative (PMI)
Benin is one of the 15 original countries benefiting from PMI, which was launched in 2005 and is led by the U.S. Agency for International Development and implemented together with the Centers for Disease Control and Prevention.

As a key component of President Obama’s Global Health Initiative and with the Lantos-Hyde Act of 2008, PMI’s funding has been extended through fiscal year (FY) 2014, and a new six-year malaria strategy has been developed. Under the new strategy, the goal of PMI is to work with partners to halve the burden of malaria in 70 percent of the at-risk populations in sub-Saharan Africa (approximately 450 million residents), thereby removing malaria as a major public health problem and promoting development throughout the African region.
PMI works with national malaria control programs and coordinates its activities with national and international partners, including the Roll Back Malaria Partnership; The Global Fund to Fight AIDS, Tuberculosis and Malaria; the World Health Organization; the World Bank; Malaria No More; the Bill and Melinda Gates Foundation; nongovernmental organizations, including faith-based and community groups; and the private sector.
Key Interventions