Home / Featured / Malaria in Review: Research, Developments, and Progress Made 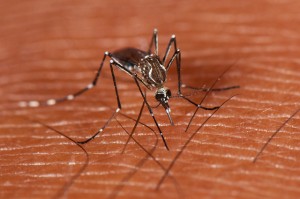 Unlike malaria mosquitoes, Aedes aegypti feeds throughout the day. As well as dengue, Aedes mosquitoes transmit other diseases, such as yellow fever and West Nile virus Photo: ©Marc AuMarc, licensed under Creative Commons, courtesy of Flickr.

Welcome to Malaria.com, where, fittingly, we take a look at some of the key developments, challenges, and advances from the past year.

The four articles that we are featuring cover a broad spectrum of issues related to malaria research and control. From investigating the evolutionary origins of malaria species to progress made on large-scale international research collaborations, and from using ingenuous genetic tools to reduce mosquito populations to analyzing the implications of new malaria funding policies, we wanted this selection to celebrate the diversity of achievements, as well as some of the emerging challenges, that have occurred last year.

Looking ahead, 2015 has particular resonance for the malaria community, in that it was the target year for achieving the eight Millennium Development Goals, of which “Combat HIV/AIDS, malaria, and other diseases” was number 6 on the list. Huge progress has been made, but clearly the goal has not been comprehensively reached, with many regions of the world still suffering from preventable diseases, including malaria. Hopefully, the progress that was made in 2014 can be sustained in 2015 and beyond, and continue accelerating global efforts to eliminate malaria and control other devastating diseases.