Last week’s UN General Assembly and Climate Summit in New York once again highlighted the critical need to reduce carbon emissions to prevent catastrophic climate change, which will adversely affect people’s livelihoods and security around the world. The opening statement by the President of the General Assembly, His Excellency Sam Kahamba Kutesa, gave prominence to important topics such as food security and economic growth, but he failed to mention one crucial issue: health. UN Secretary General Ban Ki-moon did note in his opening statements that addressing climate change will result in “healthier” populations, but overall the emphasis on the health impacts of climate change was low.

Despite this low profile on the world’s highest diplomatic platform, for almost 20 years scientists have been investigating whether the world’s changing climate will affect disease. A prominent angle of this research concerns how climate change will affect the global distribution of insect vectors of disease – high among their concerns is the distribution of Anopheles mosquitoes and the transmission of malaria. It is well known that the mosquitoes that serve as vectors for malaria require certain climatic conditions, and specifically are dependent on warm temperatures as well as sufficient precipitation to produce the standing water that is necessary for larval development. It is also worth mentioning that the malaria parasite itself has some temperature requirements for development and transmission, which adds an extra layer of complexity[1]!

The El Niño Southern Oscillation (ENSO) phenomenon bring short-term changes to temperature and precipitation throughout many parts of the world. Even in these temporary cycles, scientists have observed changes in malaria vector distributions and prevalence. Image courtesy of NOAA.

Even across a relatively short timescale, scientists have observed changes in mosquito distribution based on climatic variation. For example, the El Niño Southern Oscillation, which creates cycles of anomalously warm and cool sea surface temperatures in the eastern Pacific Ocean, has been shown to affect mosquito densities and distributions in South America through increasing precipitating in dry areas and reducing river flow in others, thus leading to outbreaks of malaria[2].

With respect to the longer term effects of climate change on mosquito distributions and malaria prevalence, one of the difficulties is a lack of consensus on what the meteorological effects of climate change will actually be. Scientists have developed many different predictive and descriptive models, using a variety of methods and some producing contradictory results (though I should note that these studies are all based on the premise that anthropogenic carbon release is driving large-scale, long-term changes in the world’s climate). One thing many of the models have in common is that they emphasize the challenges, variability, and assumptions associated with making these types of predictions, primarily due to the large number of applicable variables.

Small changes to temperature may have disproportionate knock-on effects in terms of driving ocean currents, which in turn are often responsible for rainfall patterns, for example. However, many scientists also agree that the resultant changes to mosquito distribution are likely to be non-linear – that is, the distributions won’t change in a way that is incrementally predictable according to the amount of initial change. This, naturally, further complicates the pictures. 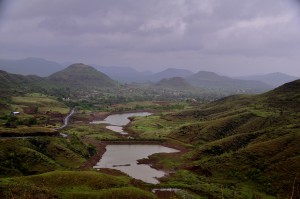 Increased temperatures and rainfall may increase vector populations in areas that were not previously suitable for mosquito development. Standing water is required by mosquitoes for breeding. Photo: © Amit Rawat, licensed under Creative Commons.

On the whole, it seems likely that malaria will increase in some areas, such as by mosquitoes being able to survive at higher elevations than previously, and at higher latitudes in both the northern and southern hemisphere. Areas that are currently too dry for regular standing water, but which are in existing temperature zones for malaria and which are predicted to get wetter, may also see an emergence. Having said that, malaria may also be reduced in some parts of the world, notably those that are predicted to become appreciably drier. In balance, the World Health Organization predicts an additional 60,000 deaths from malaria by 2030 as a result of climate change, and an increase in the population at risk from malaria based on climate change alone; critically, when expected increases in Gross Domestic Product (GDP) are also factored in to the model, the situation reverses, and the total population at risk from malaria decreases slightly. However, in a scenario where GDP increases as predicted and no climate change occurs, the models predict malaria would be eradicated from virtually the whole world, with the notable exception of sub-Saharan Africa[3]. 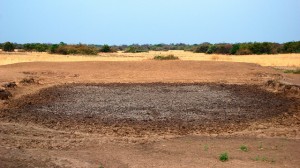 Some areas of the world are predicted to get drier, which may reduce likelihood of transmission of malaria. Photo: ©flöschen, licensed under Creative Commons.

Increased temperatures and rainfall may increase vector populations in areas that were not previously suitable for mosquito development. Standing water is required by mosquitoes for breeding. Photo: Amit Rawat, courtesy of Flickr[/caption]Overall, given the uncertainties associated with climate change scenarios and the resultant models of vector distribution and density, it will be critical to have effective surveillance systems in place, and particularly in those that appear to be high risk for malaria emergence based on the best-fit models we have to date. Early detection, coupled with tried and tested prevention methods such as vector control, will be important tools to ensure that even under severe climate change scenarios, the threat from malaria will be mitigated to the maximum extent.