Effects of co-infection on human health, the need for further research and steps towards integrated control 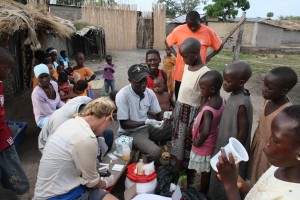 In large parts of the world, the Plasmodium protozoans that cause malaria co-exist alongside a number of other pathogens and parasites, many of which are also infectious to humans. One of the foremost challenges in tackling the huge burden of malaria around the world, and particularly in developing countries, is understanding the dynamics between malaria and these other infections. For example, researchers are seeking to understand the effects of co-infections on a patient’s health and well-being, while at the same time, deciphering how best to provide treatment and disease control regimes in regions with high co-infection prevalence. Moreover, of course, the effects and intricacies of co-infection may vary between regions, or between the types of infectious found alongside malaria. This blog gives a quick introduction to some of the common diseases often found alongside malaria, and especially in the developing world, where significant research resources are directed but also where treatment and control needs are greatest.

Malaria and HIV, taken together, are by far the two most deadly diseases on the African continent. Tragically, given the ever-increasing number of people becoming infected with HIV, and the near ubiquitous presence of malaria in sub-Saharan Africa, the prevalence of co-infections is also on the rise. Fortunately, research interest in the topic of co-infections has concurrently increased, leading to a number of scientific papers published over the last decade relating to the effects of co-infection on patient health, distribution and prevalence of both diseases, as well as implications for treatment and control programmes.

For example, there is evidence that the body’s biological response to malaria infection, involving complex immunological pathways, may leave a patient more vulnerable to progression of HIV towards AIDS (1). For example, there is evidence that infection with malaria increases the viral load of HIV-infected patients (2), which can result in clinical symptoms as a result of the assault on the immune system. Moreover, an increased viral load makes it easier for that person to pass on the HIV virus, for example during sexual intercourse or needle sharing.

From the other side, infection with HIV may also make people more susceptible to malaria, as the virus interferes with immune responses generated in childhood, or more generally breaks down the body’s defenses, resulting in more frequent, and more severe, malarial episodes (3). More evidence for this effect can be found in the recent increases of malaria in regions where the disease has previously been kept at low levels due to successful mosquito control programmes, such as South Africa and Namibia, but where levels of HIV incidence are high (4). In addition to the effect of greater malarial distribution, evidence based on the other effects of HIV on malaria infection, such as lower cure rates from treatment and longer infection periods, may also contribute to resistance to current malarial treatment developing in co-infection regions (5).

‘Helminths’ is a convenient term for referring to a wide range of parasitic roundworms, tapeworms and flukes. As with HIV, there is a vast overlap of geographic range between malaria and many of these worms, and as with HIV, the greatest burden of co-infection is in sub-Saharan Africa, although parts of Asia are likely also heavily afflicted. Unlike HIV, research and control of helminthiasis is underprioritised and underfunded, earning many parasitic worms a place among WHO’s list of ‘neglected tropical diseases’. This is despite the fact that, just to give a few examples, up to 700 million are currently at risk from infection with schistosomiasis, whereas almost a fifth of the world’s population (1.3 billion) can expect to be infected with Ascaris roundworms. Given that many of these cases will occur also in regions with high malarial prevalence, the high incidence of co-infection beginning to be reported from many locations should not come as a surprise (7).  Research indeed is beginning to show some interesting, if conflicting, findings regarding the clinical and control implications of malaria co-infections with helminths.

A key symptom of both malaria and helminth infections, and, resultingly, of co-infections, is anaemia. Malaria causes anaemia through destruction of red blood cells as part of its reproductive process; helminths create the same effect through different mechanisms, some of which are poorly understood. In Kenya, it has been shown that co-infection with malaria and hookworm can lead to severe depletions in haemoglobin; although in the West anaemia is not seen as a particularly severe condition, in Africa its burden is strengthened by other factors, such as sickle cell anaemia and malnutrition. Pregnant women, children and immuno-compromised people are at particular risk; it has been estimated that severe anaemia is responsible for half of all malaria-related deaths in children under five in Africa (7, 8).

The immunological consequences of co-infection are more equivocal. For example, a study in 2006 reported an apparent protective effect of Ascaris roundworms on infection with malaria; children in Madagascar who were co-infected and then treated for their worm infection subsequently had higher malaria parasite loads (9). Similarly, in Thailand, a dose-dependent protective effect was observed on patients co-infected with Ascaris and cerebral malaria (10); it is hypothesized that helminths may induce a long-term immune response which results is greater malarial tolerance (11). In contrast, an earlier study in Senegal revealed an association between high prevalence of Ascaris and severe attacks of malaria, although the authors left open the question as to the mechanism of action of these effects (12).

The uncertain pattern of action is true for other helminth infections co-occurring with malaria. For example, in Senegal, one study showed a correlation between high Schistosoma mansoni parasitaemia (S. mansoni causes the disease intestinal schistosomiasis) and severe malarial attacks (13). Only two years later, a different group of researchers published data that suggested light infection with S. haematobium (a related schistosome parasite, which causes urinary schistosomiasis) may actually be protective against high malarial infection intensity (14). Clearly, infection intensity plays a role in understanding the intricacies of protective versus harmful action, but it may be that this relationship also differs between helminths, and even closely related ones.

As with malaria and HIV co-infection, the expanding knowledge about the effects of helminthiases on malaria morbidity and control is opening the research world’s eyes to the challenges ahead. However, at the same time, these studies are opening new avenues of further investigation, as well as providing the opportunity for synergies between different research groups, NGOs, donors and government health departments. How best to make the most of these emerging opportunities for coordinated and integrated research and control is the key to success, and by asking this question directly of experts in this field, we hope to provide cutting edge commentary and links to original research on this topic here at malaria.com.