Home / Blogs / Is LAMP Diagnostics the Key to Malaria Elimination? 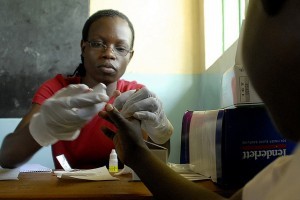 Malaria elimination is possible within a generation. But controlling malaria and eliminating malaria are different, and each pose certain challenges. Overcoming the unique challenges of malaria elimination is essential to meeting this goal, and the barriers presented in malaria elimination settings will require different strategies and policies. Researchers at the Malaria Elimination Initiative (MEI) at the University of California San Francisco (UCSF) are gathering evidence to inform elimination efforts going forward. I am a Masters candidate in the UCSF Global Health Sciences program, and I am working in the field in collaboration with the University of Namibia on a cross-sectional survey of malaria prevalence.

Malaria is caused by parasites of the genus Plasmodium. The parasites infect people through the bite of female Anopheles mosquitoes. The parasites hide inside the body’s cells before bursting into the bloodstream; leaving fever, chills, and body aches in their wake. Most people can recover from the infection, but in some severe cases the parasites invade the brain or cause organ failure. Children under five years old and pregnant women are at highest risk for severe complications.

The world has made substantial progress toward reducing the burden of malaria in the past 15 years thanks to new technological innovations in malaria prevention and treatment. For example, pyrethrin impregnated bed nets are a low cost and effective way to reduce malaria (For you basketball fans, Stephen Curry not only scores on the court, but assists around the world with his contributions to Nothing But Nets #gowarriors). Rapid diagnostic tests (RDTs) allow for point-of-care diagnosis of malaria. Artemisinin combination therapy (ACT) was a major breakthrough in malaria treatment. The global incidence of malaria has decreased by an average of 3.27% per year since 2000 thanks to expanded coverage of these interventions. Child mortality due to malaria in sub-Saharan Africa has decreased by 31.5% during the same time period. Due to this drop in malaria cases, many believe releasing the world from the grip of malaria permanently is possible. In a seminal conference in 2007, Bill and Melinda Gates galvanized global leaders to commit to malaria eradication.

Despite this pledge to fight malaria around the world, about 3.2 billion people are at still at risk of malaria infection. In 2013, there were an estimated 198 million cases and 584,000 deaths due to malaria. Transmission is most intensein Africa and severely affects those in poverty. There is an urgent need to expand malaria control and elimination efforts to ultimately eradicate malaria. The current malaria eradication strategy calls for expanding control efforts in high transmission settings, eliminating malaria gradually at the fringes of transmission, and developing a preventive vaccine. The estimated cost of malaria elimination is $5.3 billion, but this investment will save millions of lives and dollars in the long run.

The epidemiology of malaria changes as malaria incidence drops. Asymptomatic carriers, people who are infected by the malaria parasite but who do not show symptoms, are responsible for about 20-50% of transmission. Most of these carriers are adult men instead of children and pregnant women. The proportion of people with sub-microscopic infections increases, making diagnosis difficult.Imported malaria from highly endemic neighboring countries create a source of epidemics in countries with low transmission.

In malaria control settings, local clinics see a large number of cases, too many cases to investigate and intervene at the source of infection. Malaria surveillance in high burden settings relies on passive case detection, where cases are detected when patients with fever seek care at health facilities. The high volume of malaria cases makes investigating every case impractical, and reporting consists of aggregate reporting by district. As the number of malaria cases decrease, it becomes practical and necessary to investigate and find additional cases. Additional cases are often asymptomatic. The problem of asymptomatic cases illustrates the importance of understanding the difference of incidence versus prevalence in achieving malaria elimination. Incidence is the number of malaria cases out of the total population over a period of time.Prevalence is the number of people with malaria out of the total population at a set point in time. Passive surveillance does not measure the true prevalence of malaria, nor addresses the epidemiological and diagnostic challenges in settings preparing for elimination. Effective surveillance in elimination settings requires active surveillance. Active surveillance involves finding and testing individuals in a selected geographic area, regardless of symptoms, to identify and treat additional cases of malaria.

There are limitations to the currently accepted malaria diagnostic tools. Blood smear microscopy is time consuming and requires highly trained staff to be accurate at lower parasite densities. Although rapid diagnostic tests are quick and easy to use, sensitivity decreases for infections with less than 100 parasites per microliter. The most accurate method to diagnose malaria is polymerase chain reaction (PCR) but this requires expensive equipment and reagents, highly trained laboratory personnel, and has long turnaround times. Diagnosing asymptomatic cases of malaria is challenging because asymptomatic people do not seek care and asymptomatic cases are often undetectable by microscopy or RDTs. The changing epidemiology and increased importance of surveillance in elimination settings requires a diagnostic tool that can detect asymptomatic infections as well as PCR, but costs less and gives results faster.
Loop-mediated isothermal amplification (LAMP)

A promising new nucleic acid based method is loop mediated isothermal amplification (LAMP). Like PCR, LAMP amplifies a specific section of DNA. Unlike PCR, LAMP does not require a thermocycler, the reaction takes place at a constant temperature. This process uses multiple different primers and a DNA polymerase to create a stem-loop structure of DNA, which serves as a template for amplification. LAMP has a sensitivity similar to PCR at low parasite density, 92.7% for 10 parasites per microliter. LAMP has lower costs, faster turnaround times, and less technical requirements compared to PCR for malaria diagnosis. LAMP can detect malaria DNA for from dried blood spots, which are commonly used to collect and test for malaria in active surveillance. In the lab at theUniversity of Namibia, the speed of LAMP has enabled our group to process about 150 samples per day. Fast and accurate results makes LAMP a good option for diagnosing malaria in elimination settings.

The new challenges presented in malaria elimination settings will require different surveillance and diagnostic tools. Researchers at the Malaria Elimination Initiative at UCSF are gathering evidence to inform elimination efforts going forward. As more countries transition from malaria control to elimination, elimination policy should be made with these challenges in mind. Most importantly, policy makers should ask “Does our health system have the tools to quickly investigate every case, test everyone around the case, and provide treatment to positives in a timely manner?” A recent article in PLOS Neglected Tropical Diseases about malaria elimination in Mesoamerica and Hispanola notes that LAMP could help more countries answer “yes” to this question, ultimately resulting in a malaria free world.

Patrick McCreesh is a Master’s candidate in the Global Health Sciences program at University of California, San Francisco. His research focuses on infectious disease, with an emphasis on malaria elimination efforts in partnership with the UCSF Malaria Elimination Initiative.