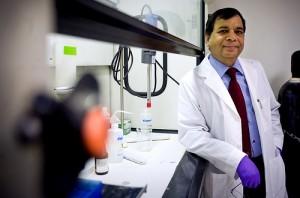 The same menace that spreads malaria – the mosquito bite – could help wipe out the deadly disease, according to researchers working on a new vaccine at Tulane University.

The PATH Malaria Vaccine Initiative(MVI), established in 1999 through a grant from the Bill & Melinda Gates Foundation, announced today a collaboration with Tulane University School of Public Health and Tropical Medicine and India’s Gennova Biopharmaceuticals Ltd. to produce and test a novel vaccine that aims to inoculate mosquitoes when they bite people.

The vaccine would work by triggering an immune response in people so they produce antibodies that target a protein the malaria parasite needs to reproduce within a mosquito.

Malaria, which kills nearly 800,000 people every year worldwide, is caused by a microscopic parasite that alternates between human and mosquito hosts at various stages of its lifecycle. Once a mosquito bites a vaccinated person, the antibodies would neutralize the protein essential for malaria parasite’s reproduction, effectively blocking the parasite’s – and the mosquito’s – ability to infect others.

The vaccine relies on a protein — known as Pfs48/45 — which is very difficult to synthetically produce, says Nirbhay Kumar, professor of tropical medicine at Tulane.

“With MVI’s support we can now work with Gennova to produce sufficient quantity of the protein and develop a variety of vaccine formulations that can be tested in animals to determine which one give us the strongest immune response,” Kumar says.

Such transmission blocking vaccines, though not yet widely tested in humans, are attracting widespread interest due to their potential to be used in conjunction with more traditional malaria vaccines and other interventions—such as malaria drugs and bed nets—to make gradual elimination and even eradication of the disease a reality.

“We’re investing in developing transmission blocking malaria vaccines to support two long-term goals: introducing an 80 percent efficacious malaria vaccine by the year 2025 and eventually eradicating malaria altogether,” says Dr. Christian Loucq, director of MVI. “A vaccine that breaks the cycle of malaria transmission will be important to our success.”