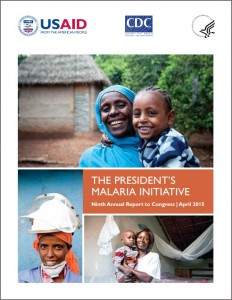 April 25, 2015, marks World Malaria Day – a day to celebrate the gains made in the fight against malaria. Each year, this day highlights global efforts to control malaria and mobilizes action to combat the disease. On this occasion, the President’s Malaria Initiative (PMI), led by the U.S. Agency for International Development (USAID) and implemented together with the U.S. Centers for Disease Control and Prevention (CDC), has released its Ninth Annual Report to Congress, which describes the U.S. Government’s contributions to the global fight against malaria.

Launched in June 2005 by President George W. Bush, the President’s Malaria Initiative (PMI) represented a major 5-year, $1.265 billion expansion of U.S. Government resources for malaria control. The Initiative is led by the U.S. Agency for International Development (USAID) and implemented together with the U.S. Centers for Disease Control and Prevention (CDC).

PMI funds programs in 19 focus countries in Africa and one regional program in the Greater Mekong Subregion of Southeast Asia. In addition, USAID provides malaria funding to Burkina Faso, Burundi, and South Sudan in Africa and the regional Amazon Malaria Initiative in Latin America (which includes Brazil, Colombia, Ecuador, Guyana, Peru, and Suriname).

When it was first launched, PMI’s goal was to reduce malaria-related mortality by 50 percent across 15 high-burden countries in sub-Saharan Africa through a rapid scale-up of four proven and highly effective malaria prevention and treatment measures: ITNs; IRS; accurate diagnosis, and prompt treatment with ACTs; and IPTp. With the passage of the Tom Lantos and Henry J. Hyde Global Leadership against HIV/AIDS, Tuberculosis, and Malaria Act in 2008, PMI developed a U.S. Government Malaria Strategy for 2009–2014.

In February 2015, PMI launched its next 6-year strategy for 2015–2020. The Strategy takes into account the progress over the past decade and the new challenges that have arisen, setting forth a vision, goal, objectives, and strategic approach for PMI through 2020, while reaffirming the longer-term goal of a world without malaria. Malaria prevention and control remains a major U.S. foreign assistance objective, and this strategy fully aligns with the U.S. Government’s vision of ending preventable child and maternal deaths and ending extreme poverty. It is also in line with the goals articulated in the draft Roll Back Malaria (RBM) Partnership’s second Global Malaria Action Plan and the World Health Organization’s (WHO’s) draft Global Technical Strategy.

The U.S. Government shares the long-term vision of affected countries and global partners of a world without malaria. This vision will require sustained, long-term efforts to drive down malaria transmission and reduce malaria deaths and illnesses, leading to country-bycountry elimination and eventual eradication by 2040–2050. The U.S. Government’s goal under the PMI Strategy 2015–2020 is to work with PMI-supported countries and partners to further reduce malaria deaths and substantially decrease malaria morbidity, toward the long-term goal of elimination. Building upon the progress to date in PMI-supported countries, PMI will work with national malaria control programs (NMCPs) and partners to accomplish the following objectives by 2020:

To achieve these objectives, PMI will take a strategic approach that emphasizes the following five areas:

These areas of focus are informed by PMI’s experiences to date, which include building on the successes that countries have achieved with the support of PMI and other partners, incorporating the lessons learned from implementation thus far, and addressing directly the ongoing and new challenges that could prevent further progress toward malaria control and elimination.