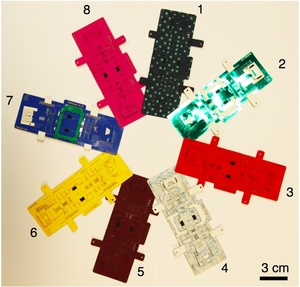 A $1 microscope made of paper might help diagnose diseases in the developing world — provided there are also people trained to use it.

The folded-paper microscope, called the Foldscope, could also open the microscopic world to curious young minds.

The Foldscope takes less than 10 minutes to put together from folded pieces of pre-cut paperboard.

It’s a simple design, but powerful: its tiny lens can magnify samples 2,000-fold.

The Foldscope’s designers say it could be a big help in countries plagued by malaria, for instance.

The World Health Organization estimates the disease killed more than 600,000 people in 2012.

It’s important to know which kind of malaria the patient has — or if she has malaria at all.

Microscopes are the most common way to identify what is causing the patient’s symptoms.

But Duke University bioengineer Robert Malkin notes that microscopes are often broken in many labs around the developing world.

“It’s pretty amazing, actually,” he said. “The number of broken microscopes is overwhelming.”

Those that can’t be fixed must be replaced, but, Malkin added, “None of our hospitals can afford to buy a microscope. They’re far too expensive.”

That’s where the Foldscope comes in.

The user punches the body of the scope out of pre-cut card stock, folds it up, and solders in a cheap LED light. The most expensive part is the high-power lens, a 56-cent ball of glass. The low-power lens only costs 17 cents.

“It was a hard challenge thinking of making the best possible instrument, but almost for free,” Prakash said. “That was our starting line.”

Foldscope is cheap but durable. Lab videos show members dropping one from a three-story building and stepping on it, but it still works.

“It’s a step in the right direction,” Malkin said.

“But there are a lot of other considerations in a microscope to make it actually work on the ground,” he added.

In many developing countries, staff who know how to use a microscope can be harder to find than the microscopes themselves, notes London School of Hygiene and Tropical Medicine epidemiologist Aurelie Jeandron.

“A microscope without trained human resources is quite useless,”  she observed.

But Jeandron adds that Foldscope could be a useful educational tool. She works to improve access to clean water and sanitation, and she says if people could see the microbes in water that make them sick, “that might help change their behaviors and their beliefs.”

Getting microscopes to the masses

Putting microscopes in the hands of the masses is part of Prakash’s mission. His group is launching the “Ten Thousand Microscopes Project,” which will distribute Foldscopes to volunteers around the world. They will field-test the Foldscope and come up with their own ways to use it.

People from 130 countries have signed up. Prakash hopes to deliver all the microscopes by the end of the summer.

He acknowledges the “training gap” in developing-world healthcare. But he hopes that making the tools available will be a step forward.

And he looks forward to opening eyes and minds to the wonders of the microscopic world.