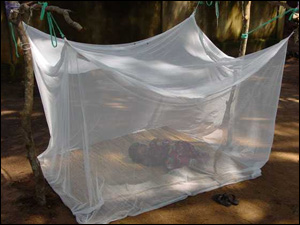 On April 1, 2011, the New York Times ran a story entitled: “Mission Accomplished, Nonprofits Go Out of Business,” and prominently featured one of the leading anti-malaria groups, Malaria No More, as an example of an organization that was basically close to completing it’s mission of distributing bed nets to populations at risk of contracting malaria, and would likely shut down by 2015.

The Times wrote: “A few nonprofit groups have recently announced plans to wind down, not over financial problems but because their missions are nearly finished. Most notable, perhaps, is Malaria No More, a popular nonprofit that supplies bed nets in malaria zones. Its goal is to end deaths from malaria, a target it sees fast approaching. The charity has announced plans to close in 2015, but it is keeping its options open in the unlikely event that advances against malaria are reversed.”

The New York Times story features an image of Scott Case, vice chairman of Malaria No More, with a caption indicating the organization will close in 2015.

Just two days later on April 3, Malaria No More released a statement, reprinted in its entirety below,  refuting the Times story:

Yesterday an article appeared in the New York Times, entitled “Mission Accomplished, Nonprofits Go Out of Business”. This article has caused significant concerns and confusion, both for Malaria No More and our partners.

The premise of the article—that mission-driven nonprofits work to reach their goals and consequently shut their doors—is a good one. By focusing tirelessly on the goal, organizations drive for sustainable change and progress. Yet premature declarations of victory risk putting both the progress and the goal in jeopardy.

The entire malaria community should be incredibly proud of the progress we’ve made. We look forward to the day when no one is dying from malaria—but we know that there is a lot of work to do until then.

Join the discussion in the Malaria.com Group: Bed Nets Discussion.