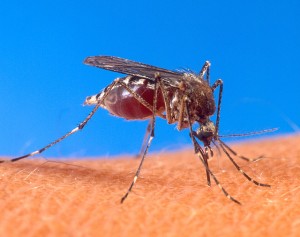 University of Maryland scientists are working on a genetically-engineered fungus that would kill the malaria parasite.

The battle against malaria continues to challenge doctors, scientists, and public health officials. Now, a team of British and American scientists have developed a novel and promising approach to malaria control.

Malaria kills about a million victims a year, mostly children in Africa, and almost half the world’s population is at risk.

The malaria parasite is carried from victim to victim by mosquitoes, which are increasingly developing resistance to the insecticides used to kill them.

As an alternative to chemicals, University of Maryland professor Raymond St. Leger and his colleagues have been working on a genetically-engineered fungus to control malaria-carrying mosquitoes.

One possibility they considered was using the fungus to kill the mosquito, the way insecticides do.

“The problem with that is, if the mosquitoes have evolved resistance against chemical insecticides, they could also evolve resistance against the pathogen,” St. Leger explained. “So we did something different. We took genes which encode anti-malarial, anti-parasite proteins – so we put those into the fungus.”

The result is a fungus that kills the parasite directly. And, the genetic modification of the fungus could be adjusted to counter resistance in the malaria parasite as it evolves.

St. Leger says the anti-malaria fungus could be used just like chemical insecticides.

“So you could apply it on cotton sheets hanging inside houses which the mosquitoes would light on – netting, bed netting, on walls, baited traps or as sprays. That’s how it could be applied, just [as] you would apply a chemical insecticide,” he says.

It may be a couple of years before this modified fungus is approved for use. But it wouldn’t be the first fungus-based product on the market. A similar modified fungus is already in use against locusts in Africa, Australia and China, and at a cost comparable to chemical insecticides.

And St. Leger says that using genetically-modified fungi to control disease may be a very promising field, for example, in a disease carried by ticks.

“We can put a gene for an antibody there which will knock out lyme disease. We’re working with another strain which attacks the parasites in tsetse fly. Dengue virus is also susceptible to a particular gene we’re working with. So we can actually manipulate and model these pathogens to produce specific pathogens targeted to different insects.”