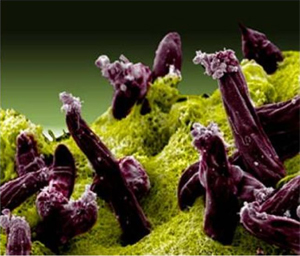 National Institute of Allergy and Infectious Diseases (NIAID) researchers have identified a gene that helps malaria-causing parasites elude the mosquito immune system, allowing the microbes to transmit efficiently to people when the insect takes a blood meal. The findings appear in the May 9, 2013, online issue of Science.

Malaria is caused by a single-celled parasite from the genus Plasmodium. The parasite undergoes several developmental stages inside the mosquito. The bite of the infected insect then transmits the disease-causing parasite to people. Malaria caused by P. falciparum, one of four Plasmodium strains that commonly infect people,mostly affects young children in Africa and causes more than half a million deaths each year, according to the World Health Organization.

Certain types of mosquitoes are resistant to malaria infection. When parasites come into contact with the serum-like liquid that flows through the mosquito’s circulatory system, the insect’s immune system interacts with the surfaces of the parasites and kills them.

Several years ago, researchers noted that a particular strain of Anopheles gambiae mosquito can kill many Plasmodium species, including several P. falciparum strains. But some P. falciparum lines from West Africa survived in the resistant A. gambiae strain. More recent work attributed these striking differences in survival to interactions between the parasites and the mosquito immune system.

By analyzing the offspring of a genetic cross between these two lines, the scientists identified the gene that makes some parasites invisible to the mosquito immune system.  The gene, called Pfs47, is expressed on the surface of the fertilized form of the malaria parasite. African parasites engineered to lack this key gene are readily detected by the mosquito and eliminated.

The NIAID scientists pinpointed the gene that allows P. falciparum to efficiently infect mosquitoes and be transmitted to people. The parasite’s ability to evade the mosquito immune system may contribute to the high rate of malaria transmission in some geographic areas where the disease is prevalent.  The researcher’s findings potentially could help scientists devise ways to recruit the mosquito immune system to prevent malaria transmission to people.

The NIAID scientists are investigating whether antibodies against the gene can block its function and allow the mosquito immune system to recognize and eliminate malaria-causing parasites.