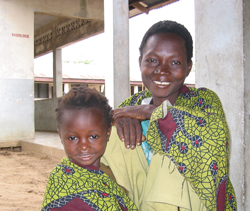 PMI focuses its efforts on the populations most vulnerable to malaria: children under five years of age and pregnant women. Source: IMA World Health

The  Democratic Republic of Congo (DRC) became the 16th focus country of the President’s Malaria Initiative (PMI) and one of the most important, after having joined the Initiative on November 16, 2010.

The DRC is the second largest and third most populated country in Sub-Saharan Africa. Nearly 95 percent of the population – some 69 million people – live in malaria endemic areas and suffer nearly 30 million cases of this treatable and preventable disease. Malaria accounts for nearly half of the deaths of the 620,000 children in DRC who die before their fifth birthday.

Next year, PMI will procure 2 million LLINs to support the universal coverage strategy in Katanga Province, which is part of the National Malaria Control Program’s (NMCP) five-year strategic plan for universal coverage. PMI will procure another 645,000 LLINs for routine distribution in 112 health zones in the four provinces where USAID works, which will be part of the NMCP’s distribution plan for 2009-2014.

With its large population, geographic size, and heavy burden of malaria, the DRC presents a major challenge to reducing morbidity and mortality attributable to malaria in Africa.

As with other PMI focus countries, the goal of PMI in the DRC will be to expand malaria control efforts to reach large areas of the country, achieving a 50 percent reduction in malaria burden by targeting those most vulnerable to malaria – children under the age of five and pregnant women. PMI will work with the NMCP to provide LLINs and antimalarial drugs, help strengthen health systems, and integrate malaria control and prevention activities with other health programs in 112 health zones in the four target provinces.

PMI will also help identify and fill gaps in other malaria interventions in close collaboration with other partners, including donors, civil society organizations, faith-based groups, and the private sector.

Malaria prevention and treatment is a core component of the U.S. Government’s development policy and the Administration’s Global Health Initiative (GHI). Rather than attack diseases individually, GHI focuses on tying health programs together, creating an integrated and coordinated system of care.

For example, PMI is expanding efforts to support health systems strengthening and to integrate with USAID’s maternal and child health (MCH) programs and the President’s Emergency Plan for HIV/AIDS Relief (PEPFAR). Given that malaria control is essentially a maternal and child health program, PMI has been working to ensure that all its activities at the health facility level are integrated with the MCH program.

The Global Health Initiative and the President’s Malaria Initiative share a common focus on women — improving their health status benefits women, as well as their families and communities. By expanding women’s access to care, increasing the focus on women’s health outcomes, and incorporating women’s perspectives into health systems, the GHI and PMI will impact women, their children, and their families.

The United States Government has supported malaria control in DRC during the past 10 years as a key component of the health program supported by USAID in almost half of the country, including Katanga, South Kivu and East and West Kasai provinces.

During the past two years, the DRC has conducted mass distribution of LLINs in Kinshasa, Equateur, Orientale and Maniema provinces. Similar campaigns are planned in Katanga and East and West Kasai in the near future. These life-saving bed nets are also being provided for routine distribution through antenatal and child health clinics. As a result of these programs, since 2008, nearly 30 million LLINS have been brought into the country by the government of the DRC and the donor community.