Home / Featured / Examining Malaria Transmission from the Perspective of the Patient, the Parasite, and the Mosquito 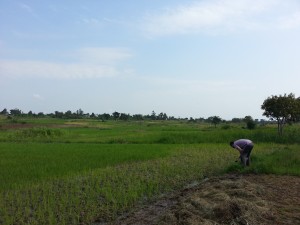 Malaria transmission is most simply described as a cycle between man and mosquito.  It could be eradicated if mosquitoes were prevented from biting humans, if people received a vaccine protecting them from the parasite, or if all patients received drug therapy.  Unfortunately, no malaria vaccine is currently available, parasites resistant to drug treatments are circulating, and mosquito biting cannot be eliminated using available insecticides.  In the search for new malaria-fighting tools, scientists worldwide study this disease from a multitude of perspectives.  Malaria is a global problem that varies greatly by location, as it can be caused by five distinct parasite species and transmitted by over 30 species of mosquito.  As a result, scientists often specialize in one area of malaria research, such as the behaviour of a particular mosquito species, or resistance of a particular parasite species to a particular drug.  While such specialization yields a wealth of knowledge about this disease, findings are often not placed in the wider context of malaria transmission.  For instance, it would be useful to know if providing insecticide-treated bed nets impacts the local malaria parasite population, or if a particular drug is equally effective across different countries.

To bridge the gap between scientists studying the malaria parasite, the mosquito vector, and the human immune response, the National Institute of Allergy and Infectious Diseases created a network of International Centers of Excellence for Malaria Research (ICEMR).  Ten ICEMRs were established in regions experiencing malaria transmission, namely Southeast Asia, South Asia, East Africa, West and Central Africa, Southern Africa, Amazonia, and Latin America.  Each center brings together US-based researchers with those from local institutions, creating and strengthening affiliations with local scientific and governmental organizations.  This multidisciplinary approach was designed to gather information on malaria transmission that could be used to both evaluate current malaria interventions and investigate new sustainable control strategies.  In addition, each ICEMR invests in capacity building at local research institutions and supports the career development of local scientists.

Some of the research questions being explored are common to ICEMRs working in vastly differing environments.  For instance, the role of environmental change has been explored in ICEMRs across several continents.  In Latin America, including the Amazon Basin, deforestation and an increase in agricultural land use is being studied for its effect upon local mosquito populations.  Recent publications from researchers at the Center for the Study of Complex Malaria in India examined the impact of temperature upon parasite development and mosquito infection, and compared the average temperatures reported by weather stations to temperatures measured within urban transmission environments [1,2].  They found that temperature can alter the rate of both mosquito and parasite development, in particular delaying the time before a mosquito first bites.  Such studies demonstrate the sensitivity of mosquito populations to environmental change, making this an important factor in malaria transmission worldwide.

While the ten ICEMRs share a set of common aims, they also pursue research questions that are particularly relevant to their respective regions.  For example, the Southeast Asia ICEMR monitors the spread of resistance to artemisinin, a component of the first-line treatment for uncomplicated malaria caused by Plasmodium falciparum.  Resistance to artemisinin presents a grave threat to malaria control, and is worsened by the distribution of counterfeit and substandard drugs.  Dr. Liwang Cui and collaborators in the Southeast Asia ICEMR recently described a new diagnostic test that could be used for rapid evaluation of the quality of artemisinin-based medications [3].  Such a tool should help local health authorities to identify substandard drugs, ensuring that only fully potent artemisinin therapy is used for treating patients.  While artemisinin resistance has not yet been detected in Africa, researchers from the East Africa ICEMR have been proactive in surveying the local parasite population to look for the genetic mutations associated with resistance [4].  Such surveillance data serves as an early warning system that could help the local health authorities respond to changes in malaria transmission.

The ICEMR program was designed as a seven year program, yet its aims to strengthen ties among malaria researchers worldwide provide a foundation for future scientific collaboration that will last beyond the duration of the individual projects.

Alison Isaacs is a postdoctoral research assistant at the Liverpool School of Tropical Medicine.  She is investigating insecticide resistance as a part of the Program for Resistance, Immunology, Surveillance and Modeling of Malaria in Uganda (PRISM), an International Center of Excellence for Malaria Research.  Her previous work includes genetically modifying mosquitoes to resist infection with a human malaria parasite.