Travellers these days are pretty savvy; the ease of international travel and the ubiquity of the internet have encouraged more people to explore the world than ever before, and to be well-informed about the locations they are planning to visit. A key milestone in this travel revolution has been in health; specialized travel clinics tend to the lines of expectant voyageurs, awaiting their roster of immunizations and patiently listening to the lists of do’s and don’ts. The vast, fortunate majority come back with no more than war stories about their first case of “Delhi belly”, or peeling skin, a testimony to the tropical sun. They have dutifully followed the advice about drinking water, haven’t touched raw vegetables and didn’t play with stray cats and dogs. They meticulously applied insect-repellant, slept under bednets and took anti-malarial medication. However, there are exceptions.  As a researcher in tropical diseases, I am always amazed when I come across one of the minority; the cowboys who consider malaria a badge of honour, a symbol of truly “experiencing” the tropics, who think yellow fever sounds romantic and amoebas are good company. More to the point, they are often woefully ignorant of some of the basic facts and principles guiding good health while travelling, and so rather than proving their fortitude, are usually the ones ending up in hospital. 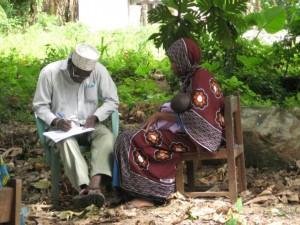 A Ministry of Health worker asks a woman questions during a health survey in Dole, Zanzibar. (Photo © Claire Standley)

Having spent four weeks in the far west of Tanzania studying the distribution of schistosomiasis (one of the so-called neglected tropical diseases, since they tend to take the back-burner in the parade of tropical disease priorities; more on that in the next blog!), I decided to take some R&R in Zanzibar, and first met up with some friends in the backpacker haven of Nungwi, on the northern tip of Unguja island. My friends were all journeying overland through Africa, and, like the conscientious travellers described above, were sensibly concerned about getting sick and ruining their trip, so were taking every possible precaution. Their combined first aid kits would probably have kept an African hospital stocked for weeks! However, as befits the rule, there was an exception. Lovely chap, had travelled extensively over the world, and confidently told me that he wasn’t bothering to take any anti-malarials this trip. When I asked him, disappointed (although not altogether surprised), why this was, he replied that he didn’t need to: after all, he had already got malaria once, and since it was also in Tanzania (just across the strait, in the capital Dar es Salaam), he’s immune to that “strain” and so can’t get re-infected.

Myth number 1 about malaria: Being infected once makes you immune.

BUSTED! You cannot be immune. The species, strain or whatever does not make a difference. Yes, people who have grown up in malaria-endemic areas, and particularly if they were exposed as children, can gain some level of protection, but they can still get the disease. More to the point, if they are removed from the source of infection for a significant period of time (for example they move to a malaria-free zone), they lose that protection, and so become susceptible again.

In any case, I gently told him he was wrong, and probably getting confused with dengue fever (which, incidentally, has the opposite effect; many initial infections are asymptomatic or only result in mild illness. However, a second infection, with a different strain, can leave the patient at greater risk from dengue hemorrhagic fever or dengue shock syndrome, both of which are pretty nasty and can be fatal). They were heading on back to Dar and from there, down to Malawi, so I hoped that he would soon be in the highlands and out of the worst of the malaria transmission area.

I had a few more days of vacation, so made my way down to Paje for a change of scenery. Paje is the kite-surfing capital of Zanzibar, and boasts a stunning stretch of sugar-white sand. While there, unable to stay away from conversations about tropical diseases, I started chatting to a British doctor who was spending the year in one of the two main district hospitals on the island. He informed me of a myth I hadn’t yet heard; apparently, the touts promoting Zanzibar as a paradise destination are prone to telling potential tourists that there isn’t any malaria on the island, in order to encourage them to visit. I had to laugh; there very definitely is malaria on Zanzibar. I had done a bit of work on intestinal worms, in collaboration with the Ministry of Health, and knew that there were on-going diagnosis and treatment programmes as part of the Ministry’s activities. The doctor I was speaking to concurred; he reckoned he saw at least ten cases a week in the district hospital.

Myth number 2 about malaria: There is no malaria on Zanzibar

BUSTED! There most certainly is; while transmission might well be lower than on the mainland, due to a lower population size and fewer mosquitoes, cases do occur and so visitors should remain vigilant about sleeping under bednets, taking preventative medicine and using insect repellant, particularly in the evenings and when going out at night.

In any case, I managed to pass the rest of the night without boring too many other people with details about parasitic infections. The next morning, I sacrificed a few minutes of beach time to check how many dozens of emails had built up over the week I was incommunicado. One of the few interesting ones was from my senior thesis student, Kelly, who is working on a malaria diagnosis study in Mang’ula, several hours south-west of Dar. Her project aims to compare incidences of malaria as determined by two different diagnostic methods: the first, the traditional blood slide, which has to be read under a microscope by a trained technician, and the second, a rapid diagnostic test (RDT) which uses a tiny droplet of blood to test for the presence of antibodies against malaria, indicating an infection. Now, the plenty of trials have been conducted on several of the different formulations of malaria RDT; by and large, all are more sensitive than looking at blood slides, which are known to have low reliability especially when someone has few malaria parasites in their blood. So, usually, the prevalence of malaria infection as detected by RDT is higher than by blood film, though the cases that make the difference are people who have light infections and so not usually feeling that sick anyway. What had surprised Kelly was that in the clinic where she was working, the records showed much higher levels of malaria when people were diagnosed with blood films than with RDTs! In any case, I am hoping she can write her experiences up as a post for malaria.com once all the data is analysed, so you can find the conclusion to the story then.

However, her email had reminded me of a discussion I’d had over breakfast with an ex-pat friend of mine, who is European but has been living in Dar for the last couple of years. Malaria prophylaxis cannot be taken for very long periods at a time – they would get prohibitively expensive, for one, plus the effects of taking the medicine long-term are not well known. So people who live permanently in malarial areas have to rely on other preventative measures; the most effective is sleeping under a long-lasting insecticide treated bednet, which can be purchased for only a few dollars (they are given out for free to many communities in Africa…see the press release about NetGuarantee, a programme run by Malaria No More). Proper bednet usage can reduce malaria transmission by an overwhelming percentage, preventing many cases of the disease; this is particularly important for pregnant women and children, who are most at risk from contracting malaria and suffering severe cases. My friend also mooted another possibility; since malaria drugs can be bought pretty easily over the counter in many places in Tanzania, how about just keeping a few doses around the house and taking them if he gets malaria symptoms?

Myth number 3 about malaria: If I get sick in Africa, it’s probably malaria, so I can treat myself without getting diagnosed.

BUSTED! There is so much wrong with this. First of all, not all malaria is alike. There are different forms of the disease, each caused by different species of the parasite. The major types that infect humans can have subtle variations in their clinical presentations, and, more importantly, are sometimes treated with different drugs. While the go-to cure for most kinds of malaria is chloroquine sulphate, several species of malaria, and most notably Plasmodium falciparum, has become resistant to this form of treatment in some areas of the world. Improper administration of medication, for example not finishing the course of pills, taking the wrong dose or using out-of-date drugs, can assist in the emergence of resistance. Similarly, if you take malaria medication when you don’t really need to (for example, like my friend who might just have a cold), it can contribute to the parasites being able to withstand the drugs in future.

Other types of treatment, such as quinine sulphate, doxycycline and atovaquone-proguanil (sold under the brand name Malarone) may be suitable in some instances as a chloroquine replacement; it is worth noting that if you use Malarone as a prophylaxis, then you can’t also use it to treat malaria if you should happen to become infected. Based on World Health Organisations established in 2006, most chloroquine-resistant malaria is now being treated with artemisinin-based combination therapies, or ACTs. But there’s one more catch; even once you’ve been treated for the initial infection, you may need more medication, depending on the type of malaria you have. Some species, namely P. vivax and P. ovale, have forms that reproduce in the liver; these can lay dormant there for many months and even years, before re-emerging into the bloodstream and causing a relapse of symptoms. The liver stages can be effectively killed with a course of a drug called primequine; however, knowing to take it requires accurate diagnosis, another argument for thinking twice before just taking some drugs at the drop of a fever. 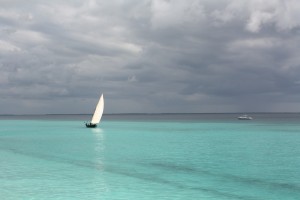 This image shows a traditional "dhow," the sailing ships introduced to Zanzibar and the East African coast by Arab traders over a thousand years ago. They are still used today for fishing and transport. (Photo © Claire Standley)

After my week in paradise, it was time to head back into the dusty interior; to Mwanza this time, to continue my research on schistosomiasis. Spending time with the tourists on Zanzibar reminded me how important it is to continue educating people about the dangers of tropical diseases; it also impressed on me how much at the forefront of people’s minds is malaria, when it comes to thinking about traveller’s health in the tropics. It certainly is one of the most deadly infections, if left undiagnosed and untreated, but it’s also not the only parasite that you can come home with or which can cause significant discomfort during a trip. Given some of these other bugs and worms are favourite research subjects of mine, I’ll use the excuse of my on-going fieldwork in the area around Mwanza to talk about the underdogs of tropical medicine next time!