The fight against malaria has enjoyed unprecedented financial and research investment over the past decade, with ensuing successes including important drops in malaria mortality and morbidity, stories of national elimination and targets set for regional elimination. The flip side to this optimism, which would be naïve to ignore, is a raft of major threats to these current successes: financial, social, technical, pharmaceutical and biological. Interspersed with bratwurst and rösti in Basel, Switzerland, leading experts from a range of backgrounds and at least 40 countries discussed these issues, raising strong reminders of the very real Challenges still facing Malaria Research and control.

The conference saw the launch of the WHO Global Malaria Program/UCSF Global Health Group Case Studies on Malaria Elimination: four case studies documenting the ups and downs along the path to elimination experienced by Cape Verde, Sri Lanka, Turkmenistan and Mauritius. Presenting these, WHO’s Rob Newman particularly praised the “army of unsung heroes” carrying out the day-to-day work in the field which led to the achievements. While cause for celebration, these case studies must also be reminders of the major risks associated with complacency. The resounding message from each country was the fragility of control and elimination successes: in all cases, malaria has resurged, most alarmingly in Sri Lanka were 17 cases in 1963 exploded into ½ million cases four years later.

The importance of correctly focusing the problem was made evident: ‘one size does not fit all’. Endemic regions endure a spectrum of transmission intensity: from regions working to control malaria mortality through to those working to eliminate the parasite. Acknowledging the different challenges presented along this spectrum and adapting the toolkit to meet these goals is essential. Diagnostic strategies for effective surveillance differ between contexts. As transmission intensity drops, the relative significance of sub-microscopic infections increases and novel serological methods for detecting exposure, rather than symptoms, may be required to identify remaining reservoirs of infection. Methods for efficient targeting of interventions will also vary as the prevalence of infection decreases. For example, large-scale spatial mapping of global limits and endemicity (see maps) have wildly different applications from real-time monitoring of population movement for predicting transmission bottlenecks or hotspot populations (“hotpops”) at the household level and anticipating outbreaks. The integrated approach of using appropriate diagnostics and surveillance to inform control strategies and treatment was repeatedly highlighted. Much progress can be made from building a ‘common agenda’ among groups investigating various facets of the malaria problem, as stated by Philippe Guerin of WWARN. 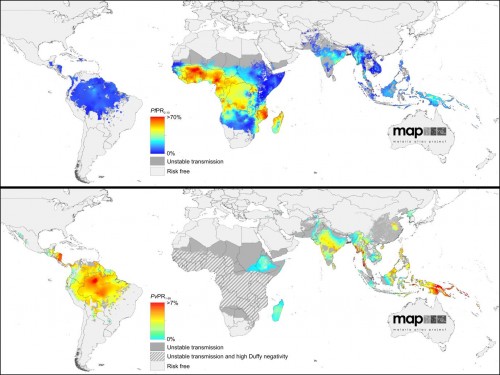 The maps above show the estimated levels of P. falciparum (top) and P. vivax (bottom) endemicity within the limits of stable transmission. The maps were originally published by Gething, et al. in the Malaria Journal and PLoS NTDs, respectively.

Further blurred definitions stall the much needed precision in surveillance. P. vivax presents a very different challenge from P. falciparum malaria, and the persistent neglect which P. vivax has suffered over the past century following its fallacious description as ‘benign’ was strongly condemned by Kevin Baird. The significance of P. vivax, both clinically and epidemiologically, was repeatedly emphasised, including by all presenters of the Elimination Case Studies: P. vivax is the ‘last man standing’. Primaquine is the only drug available against relapse. Furthermore, it targets mature sexual parasites and may block transmission: a bottleneck stage in the parasite lifecycle which will have disproportionate benefits if it can be successfully targeted. However, controversy and contradictory advice surround use of this potentially dangerous drug (a genetic vulnerability to haemolysis is common), as recently explained in a Speaking of Medicine Blog by Lorenz von Seidlein. The importance of blocking parasite transmission, particularly in areas where artemisinin resistance is emerging, forms the rationale to the WHO’s important announcement at this conference, that low doses of primaquine (0.25mg base/kg) are being recommended for P. falciparumpatients without prior safety screening.

A key message from this wide-ranging conference? To borrow from one of the conference organisers, Marcel Tanner, ‘Don’t give up!’ Ric Steketee’s sense of urgency encouraged us to learn as we go, striving to eliminate district by district, country by country. The Challenges in Malaria Research are very real, diverse, urgent and long-term. Research and financial commitments, combined with top-down engagement from political leaders to affected community members are crucial to prevent history repeating itself…

Katherine E. Battle studies the geographical variation and burden of Plasmodium vivax malaria as a DPhil student at the University of Oxford. She has an MSc in the Control of Infectious Diseases from the LSHTM. katherine.battle@zoo.ox.ac.uk

Both authors are researchers of the Malaria Atlas Project.

The authors declare that they have no conflict of interest.

Copyyight © 2012 Rosalind Howes and Katherine Battle. This post was originally published on Speaking of Medicine.