Home / Malaria Research / REVIEW: The Use of Intermittent Preventive Treatment in Pregnancy to Protect Against Malaria Infection

Review of Le Port A, et al. (2011), ‘Prevention of Malaria during Pregnancy: Assessing the Effect of the Distribution of IPTp Through the National Policy in Benin’,  American Journal of Tropical Medicine and Hygiene, Vol 84 (Issue 2): pp 270-275

Malaria in pregnancy can cause severe maternal anemia, stillbirth, and result in low-birth weight infants.   These devastating effects to the mother and fetus can impact the mother’s chance of survival, as well as that of the infant, as low birth weight particularly is a risk factor for infant mortality.  Certain strains of Plasmodium falciparum, the malaria parasite which causes the most severe and deadly forms of the disease, have what is called a ‘tropism’ for the placenta; this means that even if a woman has lived in a malaria endemic area her whole life, she will not have antibodies to that particular strain if she gets pregnant for the first time, and the infection will target the placenta and multiply rapidly. Lacking sufficient antibodies, women infected with these strains of P. falciparum are likely to develop severe infection, especially if they are also immunocompromised, for example by infection with HIV/AIDS or other diseases. 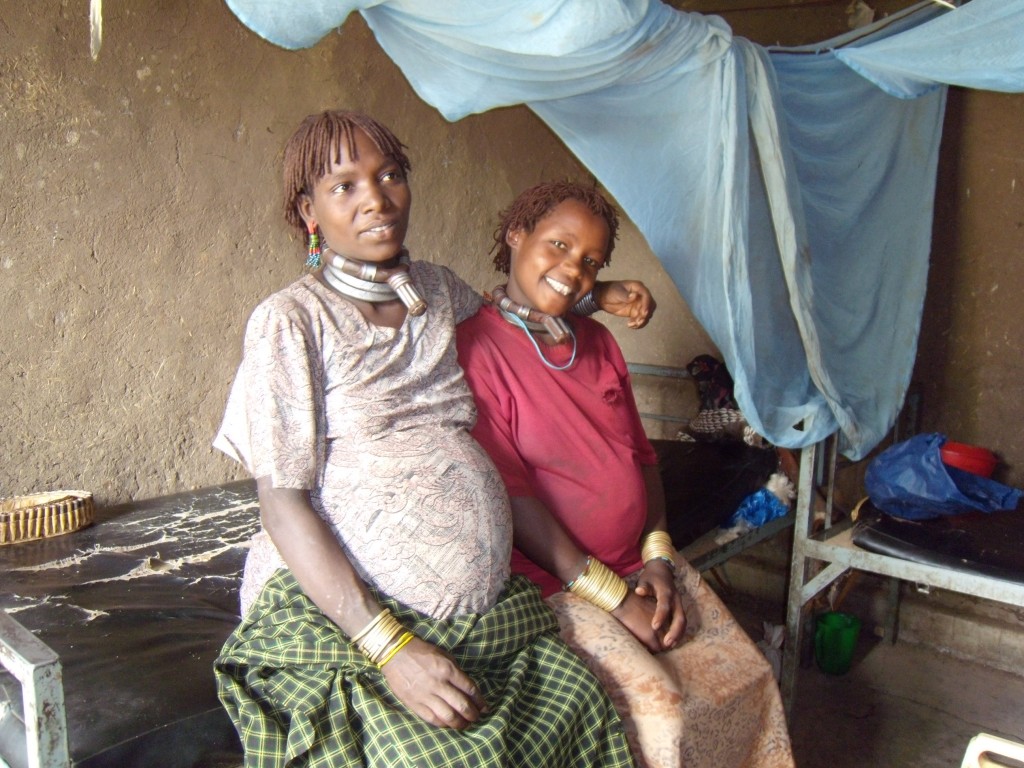 Pregnant women, such as these at a health clinic in Ethiopia, are one of the highest risk groups for severe malaria infection. Photo: Dr. L. Pearson

For over a decade, public health programs have attempted to provide intermittent preventive treatment in pregnancy (IPTp) in order to curb the health consequences of malaria in pregnancy. Prior to 2004, chloroquine (CQ) was used all over West Africa for pregnant women as a weekly regimen, but resistance led to a shift to IPTp with sulfadoxine pyrimetamine (SP).  Because of concern that resistance would develop to SP as well, studies were also done to look at mefloquine (MQ).  This article compares the outcomes of three studies to assess the impact of these strategies in Benin.  Each is designed differently and compares different IPTp regimens, and two studies were conducted in one region in Benin, while the other study was done in a different area.  The objective is to compare malaria prevention in the three studies for the two indicators of malaria infection of the placenta (MIP) and birth weight.

Two studies took place in Ouidah. The first in an observational study that took place during the year before trial comparing SP and MQ took place in the region.  During that time period, CQ was still being used for as a weekly regimen to prevent malaria in pregnancy.  Placental infections and birth weights were recorded in women who delivered in the two main maternity hospitals in the area.  The second study is a clinical trial in the same region to compare IPTp with SP and MQ.  The drug intakes and other outcomes of the study were strictly supervised as were the outcomes.  The third study was carried out Tori Bossito, 17 km north of Ouidah and although the primary aim of the study was to look at the relationship between MIP and malaria in infants, they also gathered data on maternal use of IPTp from women retrospectively.  All three studies collected data on women for a complete year, to avoid bias due to seasonal variations. 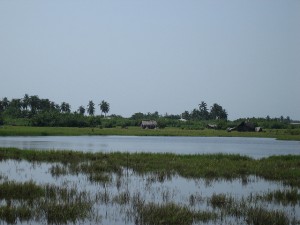 This is a village near the study site in Ouidah, Benin; wetland areas such as this provide ideal habitat for the development of malaria mosquitoes, contributing to the high burden of the disease in the area. Photo: Erik Cleves Kristensen (courtesy of Flickr)

The pre-trial study in Ouidah was observational and the women received CQ weekly for prophylaxis in pregnancy.  In trial in Ouidah was a clinical trial and women were given IPTp with SP or MQ in a closely monitored setting.  The Tori Bossito (TB) study was observational and women used IPTp with SP +/- CQ, or CQ alone in the setting of a national implementation strategy. The baseline characteristics of women in the two Ouidah studies were similar, but women in the TB study tended to be older, less likely to be primgravidaes (pregnant for the first time), less educated, and less likely to use bed nets.  Although women in TB were least likely to attend more than three antenatal visits (ANVs), women in the pre-trial Ouidah study were less likely to attend more than three ANVs compared to women in the trial.  Rates of MIP and LBW were variable in the three studies, with MIP 16.7% in the Ouidah pre-trial study, 2.9% in the Ouidah trial and 11.2% in the TB study.  LBW was similar between the Ouidah trial and the TB study (8.7% and 10%), but 15.7% in the Ouidah pre-trial study.  As expected, pooled data from the three studies identified pimigravidae as carrying a 2.3 fold increased risk of MIP compared to multigravidae (experiencing a pregnancy which was not the first).  Moreover, rates of MIP were lower in women who were in the Ouidah trial or the TB study, compared to women in the pre-trial Ouidah study who were still taking CQ prophylaxis alone.  LBW as associated with use of bednets (use of bednets decreased risk of LBW), number of ANVs (more than three ANVs, less likely to have LBW), gender of newborn (female infant higher risk of LBW), presence of MIP (if MIP, more likely to have LBW), and study (women in Ouidah trial and TB study less likely to have LBW).

Overall, there is difficulty comparing data from observational studies (Ouidah pre-trial study and TB study) and controlled trials (Ouidah trial), and from different sites and different points in time.  However, even after controlling for population characteristics, the effect on MIP and LBW remained unchanged and the authors are confident that this is attributable to the type and mode of administration of the anti-malarial prevention strategy.  Specifically, they conclude that the national implementation strategy of SP-IPTp in TB showed a reduction in LBW, as the TB study showed a rate of 10%, similar to the rate in the Ouidah trial of 8.7%, and much lower than that in the pre-trial Ouidah study of 15.7%, when women were still taking CQ weekly.  This is despite the fact that the rate of MIP was 11.2% in the TB study, while only 2.9% in the Ouidah trail (2.1% in the MQ group and 3.7% in the SP group).  This may be in part due to the fact that in vivo resistance to SP is up to 50% in children <5 years old, but is also likely due to the fact that in TB, some women were still using CQ alone and compliance was likely much lower than in the trial setting.  The authors suggest that although progress has been made toward reducing LBW through national SP-IPTp strategies, further efforts must be made to increase the impact on MIP in the context of moderate parasite resistance to SP.  They suggest this may be done through healthworkers and midwives who can better implement the IPTp strategy by increasing the number and improving the spacing of the IPTp dosing through a DOT scheme.

Overall, it is clear that IPTp strategies provide a much-needed method for prevention of malaria in pregnant women, particularly in highly endemic settings, where P. falciparum is the dominant species of malaria. This is the case across much of Africa; however, it may be that regional differences, for example demographical variations such as higher levels of primagravidae, or known local resistance to certain drugs used in IPTp, require treatment interventions that are tailored to the women most at need. For this reason, studies like the above are important, to ascertain what factors may result in better or worse outcomes in a particular location and to suggest new ways in which treatment interventions can be organized and carried out to optimize the benefit of IPTp to susceptible pregnant women.