Where in Africa is malaria mainly found?

The distribution of malaria is constrained by two main factors: temperature and the presence of suitable mosquito hosts. These mosquitoes also depend on certain climatic conditions for their development, namely warm temperatures and sufficient rainfall to produce stagnant water, required by mosquito larvae. As such, although most of Africa lies within latitudes that would normally produce warm enough temperatures for at least seasonal transmission of malaria, in fact the disease is not found everywhere. 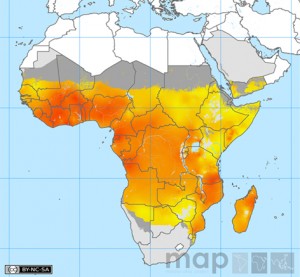 Winters in the Mediterranean region and most of the Cape are too cold for malaria, and in these areas, control interventions have largely eliminated the risk of summer sporadic transmission. Similarly, at high elevations, temperatures are too low for the development of the parasite and/or the mosquito vector. For this reason, places such as central Zimbabwe, the high plateau of Ethiopia and even large cities like Nairobi are relatively malaria-free. Finally, the Sahara and Kalahari desert regions are too dry – there is insufficient moisture for the survival of the mosquito vectors.

Based on these factors, the hotspots for malaria transmission in Africa lie in lowland areas with moderate to high rainfall. The map above shows the distribution of Plasmodium falciparum, the most severe and deadly form of the disease.