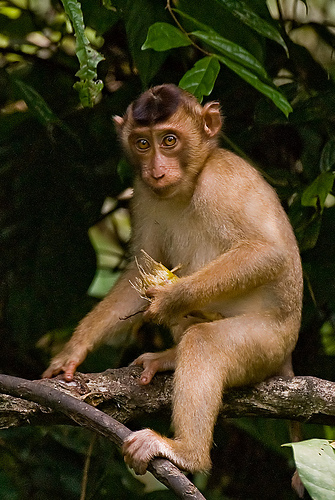 Monkeys infected with an emerging malaria strain are providing a reservoir for human disease in Southeast Asia, according to recent research. The study confirms that the species has not yet adapted to humans and that monkeys are the main source of infection.

Malaria is a potentially deadly disease that kills over a million people each year. The disease is caused by malaria parasites, which are transmitted by infected mosquitoes and injected into the bloodstream.

There are five species of malaria parasite that are known to cause disease in humans, of which Plasmodium knowlesi is the most recently identified. Previously thought to only infect monkeys, researchers have shown that human P. knowlesi infections are widely distributed in Southeast Asia and that it is a significant cause of malaria in Malaysian Borneo. Until now, it was not clear whether the infection is transmitted from person to person, or is passed over from infected monkeys.

Researchers led by Professor Balbir Singh at the Malaria Research Centre, Universiti Malaysia Sarawak, collaborating with Sarawak State Health Department, St George’s University of London and the London School of Hygiene and Tropical Medicine, examined blood samples from 108 wild macaques from different locations around the Sarawak division in Malaysian Borneo. Their results reveal that 78% were infected with the P. knowlesi species of malaria parasite, and many were infected with one or more of four other species of monkey malaria parasites that have not yet been found in humans.

By comparing the molecular identity of the parasites from monkeys and those isolated from patients with knowlesi malaria, the team were able to build a picture of the evolutionary history of the parasite and its preferred host. Their analysis reveals that transmission of the knowlesi species is more common amongst wild monkeys, than from monkeys to humans, and that monkeys remain the dominant host.

“Our findings strongly indicate that P. knowlesi is a zoonosis in this area, that is to say it is passed by mosquitoes from infected monkeys to humans, with monkeys acting as a reservoir host,” explains Professor Singh. “However, with deforestation threatening the monkeys’ habitat and increases in the human population, it’s easy to see how this species of malaria could switch to humans as the preferred host. This would also hamper current efforts aimed at eliminating malaria.”

Based on the molecular data, the researchers estimate that the knowlesi malaria species evolved from its ancestral species between 98 000 and 478 000 years ago. This predates human settlement in the area, meaning that monkeys are mostly likely to have been the initial host for the parasite when the species first emerged. This estimate also indicates that the species is as old as, or older than, the two most common human malaria parasites, P. falciparum and P. vivax.

The study was funded by the Wellcome Trust, a global charitable foundation that supports biomedical research and the medical humanities. It was published today in the journal PLoS Pathogens.