Home / Blogs / Can of Worms: Travel Parasites to Know About

In my last post, I shared some of the misguided myths about malaria that I had heard while hanging out with the tourists on Zanzibar. Then, in the in-flight magazine on the internal flight between Dar and Mwanza (my flight was over an hour late…hence how the airline, Precision Air, earned its local nickname: “Imprecision Air”), I saw an article about a little fly which I hadn’t heard about for quite some time. I flicked through my East Africa Lonely Planet: nope, no mention of it there either. That got me thinking about some of the various other parasites, bugs and worms that can sometimes take travelers by surprise when they visit Africa or other tropical destinations; everyone’s heard of the Big Three (HIV/AIDS, tuberculosis and malaria), and plenty of people know what diseases like dysentery, cholera, typhoid and polio are.

After all, apart from malaria, all are also or have historically been scourges of northern latitudes as well; even today the number of TB cases in the US remains alarmingly high. But maybe it would be worth writing about a few of these less well-known infections, not necessarily confined to the tropics but more common in those latitudes, some of which have indeed officially been branded as “neglected tropical diseases” by the World Health Organisation, having long been relegated to the bottom of the global health priority list. Yet far more people are infected with neglected tropical diseases, and particularly worms, than any of the Big Three; it has been estimated that up to 2 BILLION people could be at risk from exposure to certain types of intestinal worms alone. That’s getting close to a third of the world’s population!

The catch-all phrase “intestinal worms” is deceivingly simple, containing instead an array of different parasites, from vastly different zoological backgrounds and with a bewildering assortment of life history strategies. The group can be broken down further; schistosomiasis, a parasite which can infect the intestines or the bladder, is usually put in a category of its own. This leaves the “soil-transmitted helminthes”, or “geohelminthes”, in itself an amalgam of three types of worm, and belonging to four different species. The three types are hookworms (two different types cause disease in humans, depending on where you are, though their range does overlap: Necator americanus and Anclyostoma duodenale), whipworms (Trichuris trichiura is the Latin name) and another type of roundworm, called Ascaris lumbricoides. None of them is particularly pleasant; most hookworms infect you by latching on to the soles of people walking barefoot and entering directly into the bloodstream. Whipworms and roundworms pass their eggs in stool and if these are ingested, can infect a person this way; therefore their transmission usually relies on poor sanitation and bad hygiene.

All have fascinatingly complex lifecycles in the human body, sometimes involving some pretty gory details: hookworms and Ascaris, for example, have a maturation stage in the lungs, irritating the bronchioles so much that their host is racked with discomfort (see above for a schematic of the life cycle of Ascaris). Their coughing dislodges the worms and passes them up the windpipe into the person’s mouth, whereupon they are usually immediately swallowed. This is how they get into the gastrointestinal tract, their final destination! In any case, all three finally end up in the intestines, where they cause discomfort, diarrhea, malnutrition and lethargy, among other symptoms. I’ve seen a kid pass roundworms in his stool, having received treatment: the bucket looked like it was full of writhing spaghetti, since these worms can grow bigger than 40cm (over 15 inches) long! Chronic worm infections have even been associated with poor work attendance in adults and reduced concentration in schools, thus demonstrating some of the indirect costs of these infections.

Another intestinal worm which is known for its global distribution and high indirect economic burden is schistosomiasis, caused by flatworms (also known as “flukes”) of the genus Schistosoma. Three species cause the vast majority of infections in humans: S. japonicum is distributed through south-east Asia, with endemic foci in southern China and the Philippines. S. mansoni was originally confined to Africa and the Middle East, but is believed to have crossed the Atlantic inside captured West African slaves, and now the parasite is widespread throughout Latin America and the Caribbean as well. S. haematobium is only found in Africa and the Middle East; the vast bulk of the burden of infection from these latter two parasites is in sub-Saharan Africa. 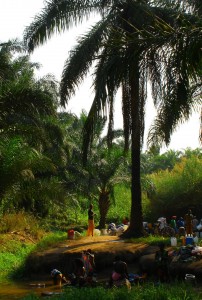 The unusual thing about flukes is that they require one or more intermediate hosts in order to complete their life cycle; in the case of schistosomiasis, this intermediate host is a freshwater snail. The larvae emerge from the snail into the water, and can penetrate directly through the skin of people bathing, swimming, collecting water or washing clothes nearby. Once in the blood stream, the larvae undergo several stages of maturation as they pass through various parts of the body, before finally ending up in the veins surrounding the intestines, in the case of S. japonicum and S. mansoni, or around the bladder, in the case of S. haematobium.

The worms then churn out eggs, some of which make it through the wall of the intestine or bladder and are voided either in the stool or urine, respectively. The eggs must make contact with freshwater again in a matter of a day or so if they are to hatch successfully and find a suitable snail host; therefore schistosomiasis transmission only occurs in areas with poor sanitation, and where people regularly defecate and urinate outdoors, near streams, ponds and lakes. The picture above shows a typical transmission site, in western Tanzania; a still pond, full of snails, that is used by the local villagers as their source of drinking water, for washing clothes and for bathing. My research revolves partially around understanding what factors cause a particular water body to be a good habitat for the snail hosts, and therefore high risk for establishment of schistosomiasis transmission; in this case, the pond appeared to be highly suitable, since the muddy fringes of the pond were full of them! 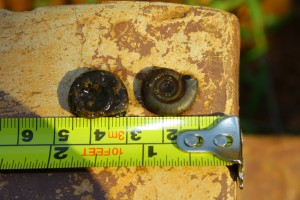 Snails at a nearby marsh site. These snails are intermediate hosts for intestinal schistosomiasis.

The good news? While there’s no sure-fire way of preventing yourself from getting soil-transmitted helminthes or schistosomiasis, there are some pretty simple steps you can take to greatly reduce your chance of infection. For example, don’t walk around barefoot, do make sure you wash your hands before eating, try to peel fruit and vegetables before eating them (or cook them thoroughly), and avoid swimming or bathing in still or slowly flowing streams, ponds and lakes, unless you have reliable local evidence that the area is schisto-free. Moreover, all of these infections are easily treated with a single dose of medication; another big aspect of my research, in conjunction with National Institute of Medical Research in Tanzania and the Vector Control Division of the Ministry of Health in Uganda, has been to monitor the on-going efforts to give these much-needed drugs to school-age kids in high risk areas around Lake Victoria, and evaluating how effective the programme has been, in order to refine future efforts.

Speaking of contaminated water, here’s another really gross and entirely preventable worm for you. Guinea worm, Latin name Dracunculus medinensis, used to be endemic throughout many countries in both Africa and Asia, though concerted control attempts and educational campaigns have reduced its distribution significantly; it is now only found in Ghana, Mali, Ethiopia, Sudan and maybe Chad. Like schistosomiasis, the worm requires an intermediate host; in this case, a tiny water bug called a copepod, which lives in stagnant water. When people drink the water without boiling, filtering or treating it, they also swallow the copepods, which are dissolved by the stomach’s acid. The larval worms inside it, however, are unharmed, and pass into the body. After male and female worms mate, the male dies, and the female burrows deeper into the host’s tissues, usually down towards the legs. Eventually, a blister forms on the skin, causing the host a huge amount of pain and a burning sensation; the female worm sticks her end out of the hole, and when the suffering patient tries to soothe his burning skin by immersing it in water, the female releases thousands of eggs, infecting more copepods and continuing the life cycle.

Now for the gross bit; as you can see from the picture above, this worm is HUGE. Females can grow to almost a meter long (3 feet!), and once infected, there is no way of curing the disease. The only option is to catch the tip of the worm as it emerges from the blister, wrap it around a stick and slowly, slowly wind it out, a process that can take weeks or even months. This process was first described over 3500 years ago, in an ancient Egyptian medical text known as the Ebers papyrus; nice to know that some things haven’t advanced since then!

In any case, the little fly that caught my eye in the in-flight magazine is not considered a neglected tropical disease, since rather than causing illness, it’s just a nuisance, and one travelers should DEFINITELY know about, since it’s easy to avoid if you know what to do. Scientifically known as Cordylobia anthropophagus (literally “eater of men” in Greek), it is more commonly called the tumbo fly, the mango fly or, descriptively, the skin maggot fly. Looking like a normal buzzing blow-fly, the females lay eggs in moist ground contaminated with faeces or otherwise smelling of people. Unfortunately, wet clothes hung out to dry work just as well; the larvae penetrate the host’s skin when they put the clothes back on, and create a boil as they mature through three further larval stages. When ready (8-12 days usually), they squeeze themselves out of the boil and drop to the ground to pupate and continue the life cycle. The boils they cause can be uncomfortable, but rarely serious; most people just get a bit freaked out when they see the maggot wiggling around under their skin! The bold can apply petroleum jelly to the larva’s breathing hole, causing it to suffocate and die; then it can be easily squeezed out. Otherwise, just make sure to iron all your clothing, including underwear and bra straps, if you’ve laid them out to dry in East and Central Africa!

I was going to write about filariasis as well, but I’ve actually started to gross myself out, and I deal with this kind of stuff every day! So maybe I’ll save elephantiasis, river blindness and loa loa for another post…